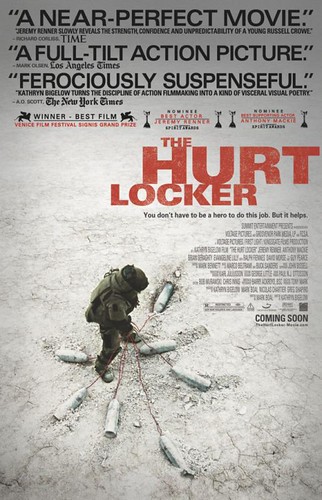 In the summer of 2004, Sergeant J.T. Sanborn and Specialist Owen Eldridge of Bravo Company are at the volatile center of the war, part of a small counterforce specifically trained to handle the homemade bombs, or Improvised Explosive Devices (IEDs), that account for more than half of American hostile deaths and have killed thousands of Iraqis.

I’ve been meaning to catch this one for a while, when the Oscar nominations come out I like to try and watch all the films mentioned if I haven’t already – especially those with multiple nominations. Eyeris has a good round up here – Oscar Noms! I Hope Avatar doesn’t nom nom everything – I’ve caught most of them but not all.

This movie surprised some people by going head to head with the 2009 blockbuster Avatar at the Oscars, both The Hurt Locker and Avatar have received 9 Oscar nominations each.

The funny part? The Hurt Locker is directed by Kathryn Bigelow who happens to be James Cameron’s ex-wife and also the director of Avatar! Strangely enough however I still haven’t watched Avatar.

Anyway more about the movie, simple speaking it’s GOOD..very good indeed as indicated by it’s 8.4 score on IMDB (not that I trust IMDB as much as I used to). I’ll be surprised if it doesn’t climb into the Top 250 at some point.

The best description I’ve heard is a disturbingly close and claustrophobic look at the strains of disabling bombs in Iraq. That’s exactly what it is.

It’s reminiscent somewhat of The Kingdom which pales in comparison to this, Syriana had a similar topic too but was a different kind of film completely and Rendition which is in the same area of subject matter but about something different again.

The cocky swagger and gungho attitude of Jeremy Renner as SSG William James somehow reminds me of Robert Downey Jr. in Iron Man and he truly deserves the Oscar nomination he’s received.

The film itself is very gritty, very intense and very in your face. In some aspects it reminds me of Jarhead as that too is very claustrophobic, intense and personal.

This movie is less about action and more about humans, why they do what they do and how they can keep doing it. What drives some people? Why they may seem crazy to us but their actions to them are perfectly justified.

It’s an exquisitely shot and directed movie and I never found myself confused, wondering why they did that or feeling sleepy once.

There’s been a lot of complaints from Iraq vets and other combat type fellas that the movie is full of technical inaccuracies and the whole thing in bogus. Honestly do I give a shit? NO..it’s a freaking movie not a documentary. I always wonder where people get off slating a movie because it’s not historically/technically/etc perfect, it’s supposed to be fantasy that’s the whole point of movies.

That aside I think it’s a great film and if you haven’t watched it you should!

Why I Sold The Panasonic Lumix LX-3 And Bought The Canon S90
Entourage – Let’s Hug It Out Bitch!