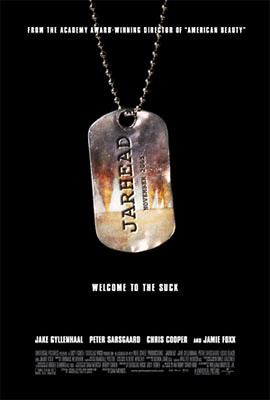 Jarhead (the self-imposed moniker of the Marines) follows “Swoff” (Gyllenhaal), a third-generation enlistee, from a sobering stint in boot camp to active duty, sporting a sniper’s rifle and a hundred-pound ruck on his back through Middle East deserts with no cover from intolerable heat or from Iraqi soldiers, always potentially just over the next horizon. Swoff and his fellow Marines sustain themselves with sardonic humanity and wicked comedy on blazing desert fields in a country they don’t understand against an enemy they can’t see for a cause they don’t fully fathom

Ah no time to do the last Cambodia post today, will do it tonight or tomorrow I guess.

Jarhead is a very good film, I’ve heard a bit about it, and I’ve been wanting to watch it for a while, afterall Jake Gyllenhaal seems to be the new in thing.

I see this film as something like the Full-metal Jacket of our generation (Yah I love that movie too). It isn’t narrow in its viewpoint, it’s doesn’t display things in a negative manner (like Born on the 4th of July) and it doesn’t glorify war. It has a balanced view, showing both the good and the bad. The camaraderie and the loneliness.

It’s most definately not a explosion ridden blood fest or action war movie, the warfare in the movie is minimal, if you want that go and watch Black Hawk Down or Saving Private Ryan. It’s a movie about the social aspects, it can go from loud and racous to quiet and poignant.

It is based on a true story, the story of Anthony Swofford during operation Desert Shield which later turned into operation Desert Storm. Gyllenhaal plays the part to perfection. Foxx also puts in a sterling performance as the cool calm war veteran and staff sgt.

The cinematography is breathtaking, especially the scenes of the burning oilfields when it’s literally raining oil. 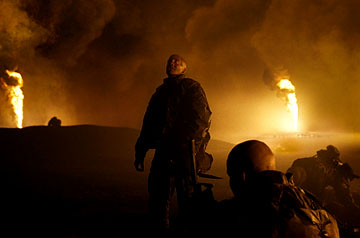 Definately worth a watch.

I did see adverts for it in Malaysia, but it seems to have been pulled as it’s not being shown at the moment. It turns out there were some great movies in 2005, with this and Crash.