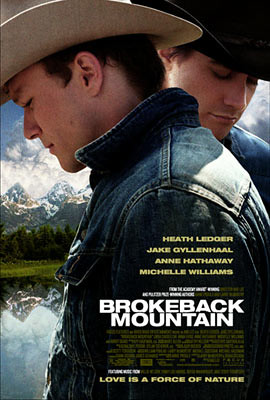 Early one morning in Signal, Wyoming, Ennis Del Mar and Jack Twist meet while lining up for employment with local rancher Joe Aguirre. The world which Ennis and Jack have been born into is, at once, changing rapidly and yet scarcely evolving. Both young men seem certain of their set places in the heartland–obtaining steady work, marrying, and raising a family–and yet they hunger for something beyond..

I know I’m a bit late to the brokeback party, but I was away when the movie came out, and I never managed to get hold of it and sit down and watch it until now..

How often do you see a Western Romantic Drama? Yeah..like never, especially one featuring homosexuals, that’s what makes this film so unique.

The movie is based on the E. Annie Proulx story about a forbidden and secretive relationship between two cowboys and their lives over the years and scores a very high 7.9 at IMDB.

I can see why Ang Lee won an Oscar for the direction, it is beautifully directed, some of the shots are like perfectly framed photographs, and some really stay in your memory.

The scenes with the mountains were beautiful.

As for the acting, Jake Gyllenhaal did very well, he conveyed the emotion and irrational nature of his character very well. Heath Ledger played quite a solemn character, Ennis Del Mar, so he didn’t have quite so much acting to do, but he worked the character very well, showing his life trapped in a marriage of convenience, his quietness was very strong and somehow his solemn attitude amplified his emotions. It was really quite amazing acting by both of them.

Showing his fear of being openly gay, due to what he witnessed as a young child, Jack Twist being more open, but in the end paying for that. 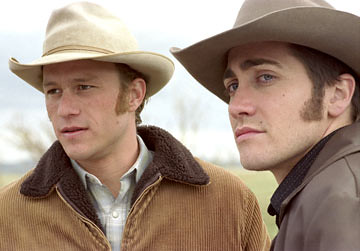 The caution paid off in the end.

It was quite an emotional movie, the direction standing out more than anything else. The score was good and both Michelle Williams and Ann Hathaway put in a brilliant perfomances as troubled wifes, who saw what no wifes should ever have to see.

Really it is a film about love, but it’s something new, something brave and most importantly of all, something difference.

Not the same old formulaic crap we see month in month out.

If you haven’t watched it, I’d definately recommend it.