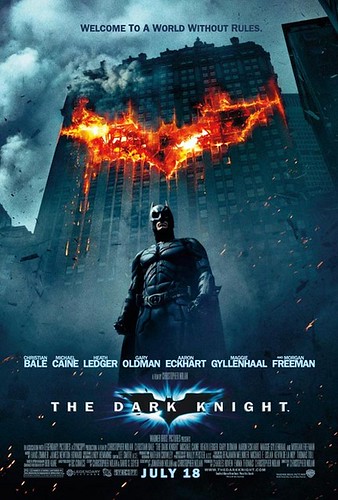 Batman and James Gordon join forces with Gotham’s new District Attorney, Harvey Dent, to take on a psychotic bank robber known as The Joker, whilst other forces plot against them, and Joker’s crimes grow more and more deadly.

Honestly I think Christopher Nolan can do no wrong….he’s only made 8 movies and 3 are in the top 250 on IMDB…and I’m guessing this will make it 4 (Memento, The Prestige and Batman Begins).

He’s back again to take us on another rollercoaster, Batman Begins was hailed as one of the best superhero movies of all time and it really returned to the roots of Gotham City..dark, brooding, nasty and violent. The character of Bruce Wayne was captured by a fantastic Christian Bale – he’s fast becoming one of the best actors around.

And this…The Dark Knight, just rocks in and blows you away. It’s sad, truly sad that Heath Ledger is gone and I would be surprised if he doesn’t nail an Oscar for his performance…he’s truly terrifying, unhinged and totally believable as the joker. It’s hands down one of the best performances in any movie I’ve ever seen. RIP Heath, you surely went out with a bang.

This movie delves deep into the character of Batman and Bruce Wayne, his own flaws and how the Joker desires to make him look at himself and why he does it – does he have a deep down loathing for society? It’s a character study and a gripping one at that. The cinematography is perfect along with the sound-track – it really takes you there.

The Batpod comes out, and it’s awesome! Christian Bale is great as Bruce Wayne and Batman, although the spotlight isn’t on him so much in this movie. 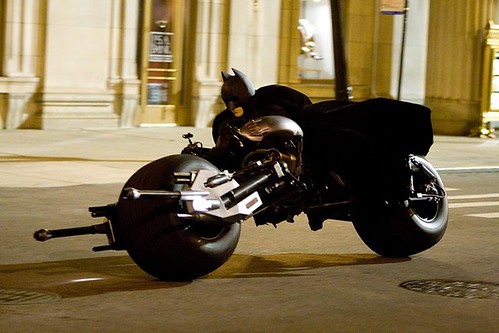 Maggie Gyllenhaal was better than Katie Holmes in Batman Begins….but still not the strongest player in the movie.

The rest of the regulars put in great performances (Michael Caine, Morgan Freeman and Gary Oldman). Not sure about Aaron Eckhart still..The Scarecrow made a very brief entrance too, but wasn’t really part of the movie.

The movie was long, and in places it felt it – this would be my one and only complaint. If not for that it’s near perfection. This is the most I’ve written about a movie for a long time and I definitely have to get a BluRay version of this to watch on a huge HD projector at some time in the future.

I give it a dark and dastardly 9/10, definitely close to being best movie of the year.

I still feel elite as I saw this movie on Tuesday…and IMDB still doesn’t have a rating because not enough people have watched it!