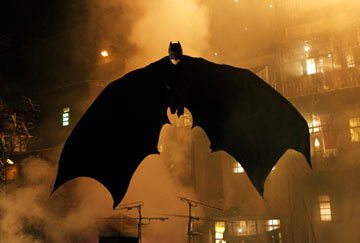 When fate prevents him from avenging the deaths of his parents, young Bruce Wayne (Bale) flees to Asia where he seeks counsel from a dangerous ninja cult leader known as Ra’s al Ghul (Watanabe). When he returns, Bruce finds that Gotham City has become overrun with crime and corruption, and that there are forces at work trying to remove him from his inherited place as the owner of Wayne Industries. Discovering a cave under Wayne Manor, Bruce assumes a new identity as a secret detective and guardian of the people of Gotham City against the criminals that plague them…

Batman has gone back to it’s roots, this is a gritty, dark movie with an impoverished crime ridden Gotham dominated by drug lords, evil-doers and corrupt officials.

It’s already hoisted itself into the number 64 spot on the top 250 in the first week!

The original Batman was a classic! All the back from 1989. With Jack Nicholson as the joker. After that was Batman Returns in 1992, with Michelle Pfeieffer as Catwoman…meow! I loved that, but the film itself wasn’t so great. Both were pretty gritty, dark movies, staying in line with the original comics, Batman Returns was a bit cheesier, after that it went downhill fast with Mr Freeze..

What most people don’t realise is a lot of these comics are actually very violent and adult in nature addressing serious issues in a form more acceptable to the mainstream..

The action through-out was great, good fight scenes, nice gadgets, nice introduction to all the things we know so well about Batman.

The only thing that ruined it for me, was as usual the hotdog cheese American lovey dovey suck my hairy nut sack ending, SHOVE IT UP YOUR ASS..

Anyway, if you haven’t, go and watch it.

20 Responses to Batman Begins – Dark, just how I like it..