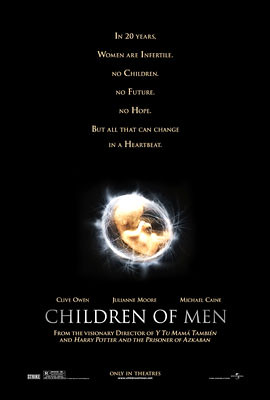 “Children of Men” envisages a world one generation from now that has fallen into chaos on the heels of an infertility defect in the population. The world’s youngest citizen has just died at 18, and humankind is facing the likelihood of its own extinction. Set against a backdrop of London torn apart by violence and warring nationalistic sects, “Children of Men” follows an unlikely champion of Earth’s survival: Theo (Owen), a disillusioned ex-activist turned bureaucrat, who is forced to face his own demons and protect the planet’s last remaining hope

Wow, I can’t believe I missed this one. Picked it up after some of the Ocean’s 13 crew mentioning that Clive Owen was the man and everyone should see Children of Men.

I can’t say I’ve even heard of this movie before that…and I have no idea why.

I was somewhat expecting a depressing drama kind of thing…but this, this is a stunning film, definitely the best post-apocalyptic rendition of London, rather than the mini-USA rendered in V for Vendetta. It’s banged straight in at #125 on IMDB’s Top 250 Movies!

It somewhat loosely based on a 1992 novel of the same name by P.D. James, I haven’t read the book so I can’t really judge on that part.

Clive Owen is really good as Theo and he is at his drunken, ruffled, depressed best he holds the movie all through along with relative newcomer Claire-Hope Ashitey as Kee. 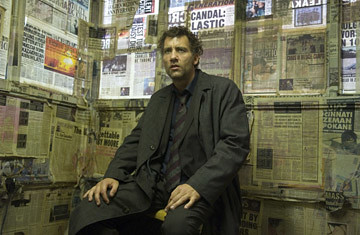 It certainly is a fast paced thriller, it slows down at time for some character development and introduction of gems like Michael Caine’s pot smoking hippy friend and the old-flame Julianne Moore.

The film doesn’t let you go with the bombing at the beginning all the way through the twists and turns to the epic 30 minute battle at the end. It has many facets aswell as a socio-political commentary, it echoes some modern events, but does so subtly enough that it does distract from the main story. It also has some nice references to pink floyd, the current immigration problems in various countries (especially UK), homeland security and a few others.

The soundtrack is something else aswell, totally nuts.

Film wise, it’s beautiful shot with some extremely long continuous takes adding to the tension and most of the film was shot in natural light giving it an extremely realistic feel. It reminds me in some ways of 28 days later – the sequel of which I missed due to the fact they decided to only show it at 3pm.

It’s so un-Hollywood as well, like the scene with the blood on the camera, Hollywood would have cleaned that shit off.

I suggest everyone go see this, NOW.