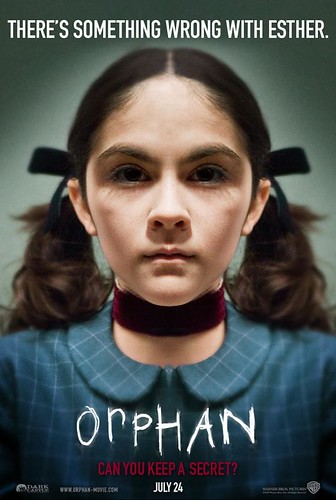 The tragic loss of their unborn child has devastated Kate and John, taking a toll on both their marriage and Kate’s fragile psyche as she is plagued by nightmares and haunted by demons from her past. Struggling to regain some semblance of normalcy in their lives, the couple decides to adopt another child. At the local orphanage, both John and Kate find themselves strangely drawn to a young girl named Esther.

I finally got around to watching this, I’ve heard a little about it – mostly good things but have avoided checking any scores or reviews.

After watching I checked it out and it seems to do well with a pretty solid 7.2 on IMDB.

Personally I think it’s one of the better thrillers of this year, it’s not a horror movie so don’t be mistaken and it’s certainly no terror like Drag Me To Hell.

Either way it’s a good film, Isabelle Fuhrman is phenomenal as Esther and the parents are well played by Vera Farmiga (who tends to get typecast to these roles) and Peter Sarsgaard (who has mainly been in B movies).

It’s filmed well, tension is created by great use of music and SFX combined with interesting camera angles, close ups and shallow depth of field shots.

The movie just gets more and more twisted as it goes along and I did guess the ending before it came, but it was still original and thoroughly enjoyed the movie.

If you go into this expecting a horror, you’ll be disappointed – but if you watch this with an open mind as a thriller you’ll enjoy it greatly.