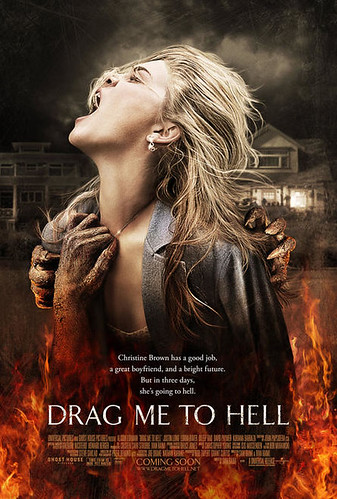 Christine Brown is an ambitious L.A. loan officer with a charming boyfriend, professor Clay Dalton. Life is good until the mysterious Mrs. Ganush arrives at the bank to beg for an extension on her home loan. Should Christine follow her instincts and give the old woman a break? Or should she deny the extension to impress her boss, Mr. Jacks, and get a leg-up on a promotion?

Back to his heydays of Evil Dead and Army of Darkness Sam Raimi has come out with a great modern terror film, yes that right the genre is terror not horror.

I actually had quite low expectations for this film and was pleasantly suprised, it was actually really good! It scores an impressive 7.5 on IMDB.

For some reason I kept thinking the lead was played by Reese Witherspoon, but it’s not of course – it’s Alison Lohman who plays the part terribly.

The show is stolen however by the crazy gypsy lady Sylvia Ganush played by Lorna Raver.

In terms of concept it’s an old fashioned film with misdirection, suprise and suggestion but rather than becoming boring it’s really very enjoyable.

For Raimi fans (especially his early works) this is a must see, and generally a must see for anyone into horror/terror flicks.

One of the better films of 2009 definitely, if you haven’t watched it I suggest you do so immediately!

8 Responses to Movie Review – Drag Me To Hell – True Terror