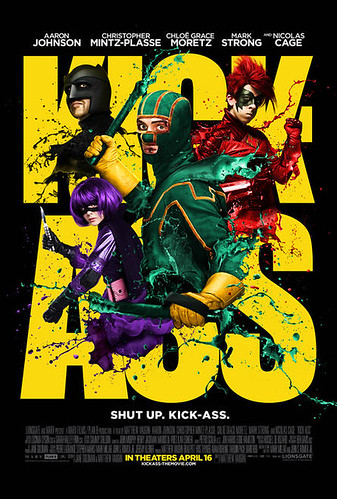 Dave Lizewski, a comic-book fanboy, decides to take his obsession as inspiration to become a real-life superhero. As any good superhero would, he chooses a new name — Kick-Ass — assembles a suit and mask to wear, and gets to work fighting crime. There’s only one problem standing in his way: Kick-Ass has absolutely no superpowers.

This was a movie that pretty much came out of no-where, only comic book geeks knew about it and it started to get a lot of hype online and pretty much became an instant cult classic as soon as it was released. It’s also doing extremely well on IMDB with 8.3/10 and straight into the Top 250 at #146. Thankfully I managed to see it while it was still showing at the cinema, I was also happy to see the new censorship standards in place and the amount of cutting was extremely minimal even if a little odd at times (they let Hit Girl say the ‘c’ word…but censored her saying the ‘f’ word – huh?).

It’s good to see Nicolas Cage back in a good role too doing a good job, he’s had a string of horrific movies lately..after falling from the throne as one of my favourite action stars in the 90’s he went right into the middle of the b-grade list.

The star of the show is of course Kick-Ass/Dave Lizewski played by a fairly unknown actor who goes by the name of Aaron Johnson and well let’s just say he was great! 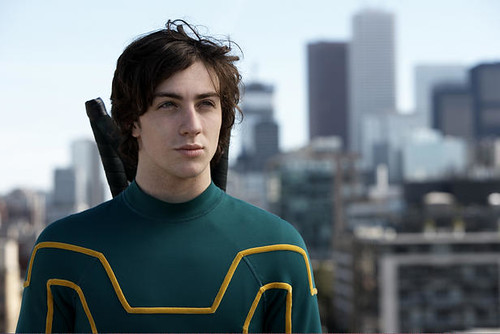 The premise of the story is a fairly simple one, a super-hero with no actual powers and well the plot is fairly standard (bad guys vs good guys, revenge etc). But the way in which the characters are developed is just superb, and well the characters themselves are super cool.

And well saying the star of the show is Kick-Ass is kinda wrong too as almost every scene was stolen by Hit-Girl played by Chloe Moretz. 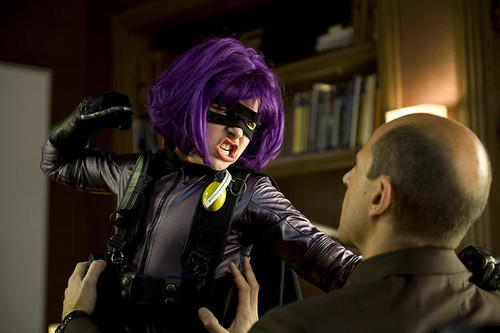 She was just fantastic! I hope there’s some spin-off movies starring her, you may have seen her if you watched (500) Days of Summer or Dirty, Sexy, Money (she was Kiki George) – but neither can compare to her role in this movie.

The cinematography was fairly simple, which honestly I like…I’m not a great fan of the new age ‘MTV’ style shooting where they shove the camera so close up it gets all shaky and you can’t really see anything aka Bourne style.

This is definitely one of the best films of 2010 so far along with Ip Man 2, the rest so far have been somewhat disappointing (hello Iron Man 2).

Anyway if you haven’t seen this movie yet, go and see it now before it finishes its run on the silver screen, it’s well worth paying to see at the cinema.