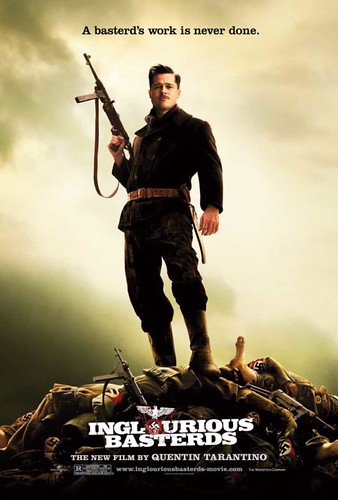 In German-occupied France, Shosanna Dreyfus witnesses the execution of her family at the hand of Nazi Colonel Hans Landa. Shosanna narrowly escapes and flees to Paris, where she forges a new identity as the owner and operator of a cinema. Elsewhere in Europe, Lieutenant Aldo Raine organizes a group of Jewish soldiers to engage in targeted acts of retribution. Known to their enemy as “The Basterds,” Raine’s squad joins German actress and undercover agent Bridget Von Hammersmark on a mission to take down the leaders of The Third Reich.

Finally got around to watching this masterpiece, I didn’t catch it at the cinema due to the heavy handed censorship carried out on these kind of films.

I don’t know why but Quentin Tarantino has a special knack for making extremely cool films, the whole concept of cool can’t really be defined..but he just seems to be able to do it.

Perhaps due to the fact he’s an uber film geek and his movies tend to be very self-indulgent, whatever the x-factor is – he seems to be able to do it consistently (All the way back since Reservoir Dogs and Pulp Fiction).

He’s had a couple of misses (can’t say I was a big fan of Jackie Brown), but other than that his films have been stellar.

This is an interesting movie and Quentin has been working on the script for the past 10 years (he started it even before the Kill Bill series) and finally it’s gone into production.

It seems to be well received already pushing into #70 on the IMDB 250 with a current score of 8.4!

The casting is great and I have to say Christoph Waltz as Hans Landa just steals the show, he deserves an Oscar a Golden Globe and whatever else they can throw at him. 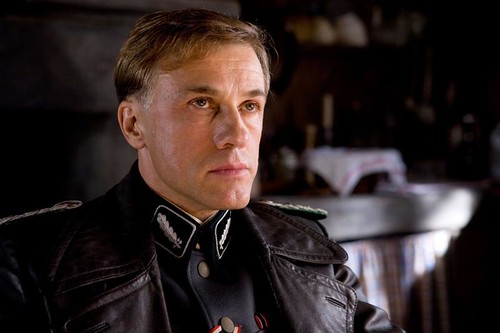 He’s extremely devious, intelligent, slightly scary and very intense but manages to be somewhat comical at the same time.

The rest of the cast do the job fairly well, Brad Pitt seems a little me wooden than usual in this film – but perhaps that’s what Alda the Apache was supposed to be like.

There was a lot of rumoured ‘stars’ in the film and 2 of Quentin’s’ favourites do make appearances in the movie (Although only as voices – Samuel L. Jackson and Harvey Keitel).

It’s a fairly long film but the pacing is excellent, it never gets draggy. The dialogue is snappy, witty and humourous and there’s plenty of unique characters to keep you interested.

The cinematography, camera angles and lighting are just superb, the soundtrack is good but not particularly memorable.

Of course don’t watch this if you are expecting a history lesson, the plot is complete nonsense in historical terms. This is WWII according to Quentin Tarantino.

Looking to get yourself a BlackBerry? You should head on over to Chinoz at KLCC today (February 5th) and grab yourself a new BlackBerry 9520 Storm 2 smartphone for 50% off the RRP at only RM888!

Then you can read my blog on the go with the awesome 3.3″ touchscreen and even check and book your own movie tickets when you are out and about. I’m a big fan of touchscreen devices as I’ve been using one for quite a while now, I think it’s the way forward – they are so much more versatile than fixed button gadgets. Plus the layout is so much more dynamic and you get a bigger screen due to the fact no space is wasted with hardware keys!