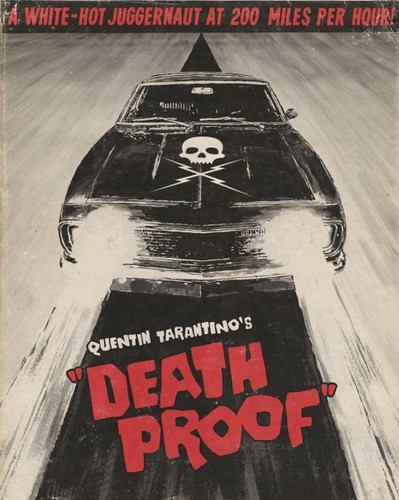 Master director Quentin Tarantino indulges his inner fanboy by paying homage to his favorite B-movies in DEATH PROOF. Stuntman Mike stalks beautiful women with his deadly vintage car, but when he picks a trio of tough girls (Rosario Dawson, Tracie Thoms, and Zoe Bell), he learns they arenÂ’t such easy prey. As with any Tarantino film, there are plenty of nods to pop culture.

This is a movie I’ve been meaning to watch for quite a while, it’s part of a double bill ‘Grindhouse’ with Quentin Tarantino and Robert Rodriguez – the RR being Planet Terror (I haven’t watched that one yet).

They are supposed to be oldskool exploitation movies from the 70’s – those that come on late at night with guns, hot chicks and lots of car crashes. They generally have no plots and are padded with dialogue to extend the meager budget.

Death Proof is no different! It’s pretty much nailed the genre right down, but then it should with QT being the ultimate movie geek.

There isn’t much of a plot to speak of but there is loads of lightning dialogue from start to finish, very Tarantino dialogue.

This is not a movie destined to be a box office hit, it’s a movie QT wanted to make himself, it’s not guided by a studio or by commercial success – this is a movie fan movie – a movie for film geeks.

Personally I loved it, the hot chicks, the awesome car chase, the obscure references and the witty lines delivered with sass.

It had some characteristically bad ass female leads too, watch the tables turn in the second half of the movie.