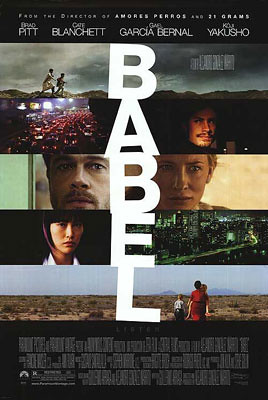 In the remote sands of the Moroccan desert, a rifle shot rings out–detonating a chain of events that will link an American tourist couple’s frantic struggle to survive, two Moroccan boys involved in an accidental crime, a nanny illegally crossing into Mexico with two American children and a Japanese teen rebel whose father is sought by the police in Tokyo.

This is a movie I’ve heard a lot about, Oscar winner and various nominations up the wazoo, I wasn’t really sure what it was about though. It’s got a very strong 7.8 on IMDB (BTW as a side note, IMDB has gone all web2.0 and I couldn’t even find the score on the new page, took me a while to spot it, I think partially because I’ve blocked the ads it ends up in a weird place).

From the name, Babel, I implied it might be something to do with language, or at least some kind of divides between humans.

I was right in a way, it’s more about cultural divides though.

To surmise I would say the movie is about other people’s stupid mistakes can effect your life so much..one small mistake or one oversight or one bad decision can totally change your life.

The examples in the movie are of course exaggerated and dramatised.

From the tag-lines, the movie is more about being lost, lost in the desert, lost to yourself or lost the world.

It an interesting concept though and bridges English, Moroccan, Japanese, Mexican and I think even a bit of French.

Must be a nightmare for the translator!

It’s a beautifully directed movie with excellent cinematography, the composition of the shots are excellent, like perfectly taken photographs.

Brad Pitt put in a good performance, to be fair Cate Blanchett really didn’t have to do anything except look pale, which she does just fine without the help of makeup.

The Japanese part of the story was a bit more confusing and I don’t really see how it was linked to the other two parts (the whole gun thing with a bit spurious).

It would have made a good stand alone story though and was a strong part of the movie.

Somehow the movie reminds me of Crash as it deals with race, family issues and other hard hitting topics.

Anyway if you haven’t watch Babel I highly recommend it, it’s a pretty intense movie though so don’t watch it if you feel like something light.

I Went to EUROPE!
King of the Swinging Nipples