Pulp Fiction – The Coolest Movie Ever? 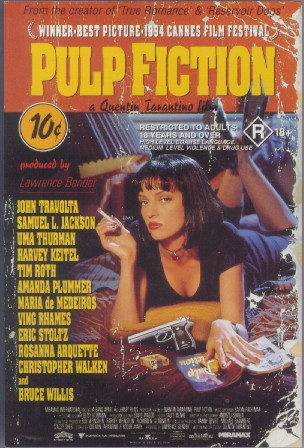 Jules and Vincent work as hitmen for crime boss Marcellus Wallace. Wallace is currently dealing with Butch Collidge, a boxer who failed to throw a fight after taking Wallace’s money and is now planning to flee the city, but can’t leave his father’s watch behind. Vincent faces some problems of his own when Wallace asks him to show his wife Mia a good time while he’s away. Some of these people redeem themselves and some don’t, and all meet an end appropriate to their choices.

I just wrote a 4 page post about this fucking movie, then it disappeared, how much does that suck. Let me try and regain my momentum

Anyway after watching The Usual Suspects[/url], I was prompted to watch some other old favourites, Pulp Fiction[/url] being the next in line.

This is a classic movie, cult status, pretty much everyone has seen it, those who haven’t wish they had seen it. It stands at a mighty number 11 in the top 250 movies.

It’s one of the first DVD’s I bought, the oldskool silver kind with no special features, no fancy add-ons, no flashy packaging. This is truly oldskool, 11 year ago this film was born.

Tarantino is some kind of weird genius, he’s a nerd, a movie nerd, he’s admitted to watching like 16 hour of movies a day, almost every day, he’s has a movie library large enough to keep him occupied, which is saying something. He appreciates such a wide variety of movies, that’s what makes his films so special, and undeniable ‘cool‘. He borrows from, evolves and adapts some old styles from classics like Shichinin no samurai[/url] and infuses with the funk filled soundtracks, reviving old classics like Son of a Preacher along the way.

He makes movies he thinks are cool and he would like to watch, and well the man has good taste. I think most, if not all, of his movies are in the top 250.

This movie has electric dialogue and flawless acting, it put Samuel L. Jackson and John Travolta back on the map. It put Samuel in my book as the coolest guy on the Earth, and that’s saying something. Even Bruce Willis puts in a great performance, it’s an allstar cast.

The film is hilarious in parts, intruiging, engaging, interesting, shocking…it’s a fairly long movie but it passes in a flash and it’s SO damn quotable, one of the most quoted and sampled movies ever (Cypress Hill?)..

The path of the righteous man is beset on all sides with the iniquities of the selfish and the tyranny of evil men. Blessed is he who in the name of charity and good will shepherds the weak through the valley of darkness, for he is truly his brother’s keeper and the finder of lost children. And I will strike down upon those with great vengeance and with furious anger those who attempt to poison and destroy my brothers. And you will know that my name is the Lord when I lay my vengeance upon thee

I own the soundtrack too and it’s one of the few soundtracks I regularly enjoy (along with Blade OST).

So many people mimic this film aswell without even knowing it, those funky dance moves you pull in Beach Club on Saturday night? Yeah those are from Pulp Fiction. 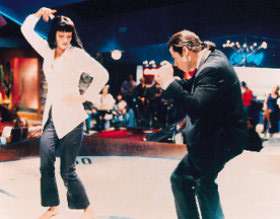 If you haven’t seen this, you totally have to, no questions.

25 Responses to Pulp Fiction – The Coolest Movie Ever?