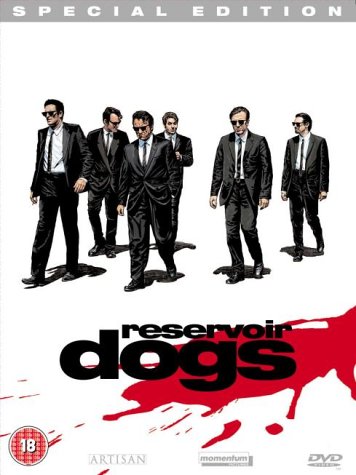 They were perfect strangers, assembled to pull off the perfect crime. Their simple robbery explodes into a bloody ambush, and the ruthless killers realise one of them is a police informer. But which one?

Ok I’m back on a spanking new dual xeon server in the same data center as Wall Street!

To continue with my look at classic movies, this film is the definition of a cult classic, not so mainstream as Pulp Fiction, few people had watched it when Pulp Fiction[/url] game out, it gained popularity when people went back to watch it after. Even though it’s an old movie (1992) it still ranks up there at number 73 on the top 250.

It has some classic dialogue, some infamous scenes and a brutal efficiency not seen before, it’s also chronologically mismatched, introducing each character one by one, like in the later films the story threads are re-arranged, most of Tarantino’s films start out with the end.

When Taratino made this movie he was a young nerdy bum, working in a movie store, totally obsessed with movies, running his own movie theme nights, watching as many movies and buying as much movie stuff as possible. Somehow the script got into the hands of Harvey Keitel, and that was it, Quentin and his partner had no money…so Harvey pumped some in to take them to New York for casting and he got some other people involved, he also co-produced the film and added some weight to it.

It’s shows what having someone ‘big’ on your side can really do.

The thing to notice is, this movie needs great actors, yes there is some violence, but it’s 95% dialogue, it’s not an action movie, these criminals are afforded superior intelligence, and are each unique characters, which get explained along the way. And it’s mostly shot in one location, the warehouse.

Tarantino’s genius does show through in parts of the movie, like the infamous torture scene, where Vic Vega puts on the radio and is dancing around to Stealer’s Wheel – Stuck In The Middle With You. It’s a light and bouncy song, playing through-out the torture scene…so you are already guilty of enjoying it, you enjoyed the song, you enjoyed Vega’s dance, so now you get the hard-stuff. If you look at it this way, it’s pretty sick, but it works, and has the desired effect.

It was also the first movie with what’s now become one of Tarantino’s signatures, the 3-way face off.

A good start to Tarantino’s career, and certainly made an impact, not perfect, but engaging and well executed.

Server moving
How I Hacked The Star’s E-mail

10 Responses to Reservoir Dogs – The Beginning