I’ve been wanting to change car for a long time, but due to saving for something else and financial commitments it really wasn’t a smart thing to do. So I had to bite my tongue, suck it up and carry on.

Not that I minded my previous car, the best Proton ever made, the Lotus tuned Satria GTi 16v. 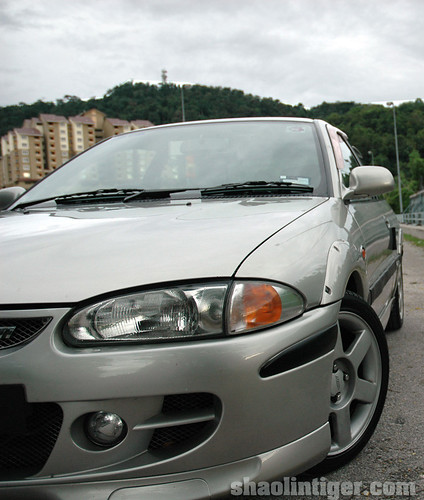 It was a great car with a solid engine the 4G93P, I spent some money on it sorting it out and it ran really well. It was getting too hard and too low and having a two door car especially with a growing dog (and growing girlfriend) was getting very inpractical.

The hardness came from performance tyres, TEIN adjustable suspension, nylon bushes and whiteline sway bars. It cornered like it was on rails, great for the track, hard cornering and lane weaving but not so great for everyday bumpy Malaysian roads.

I did quite a lot of performance mods to it too (mivec manifold, custom exhaust etc) without going the turbo route I got a lot of power from an N/A car. The next ride I wanted however must be a turbo! I’d always wanted a turbo car so I started looking around. Plus I needed something auto/tiptronic and with 4 doors, so that ruled out coupes and sports cars.

My budget was around RM80k++ up to about RM85k max, in that category I found the Volvo S40 2.0 Turbo, Volvo S60 T5 and the Mitsubishi Airtrek Turbo.

At around the RM110k mark was the Evo 7.5, older Subarus (including Impreza and Forrester) and more sedan type cars like Altezza.

I did look at the Caldina, but it starts to get expensive then at around RM125k for a decent spec Caldina Z or GT.

After a lot of research and the fact I’d always loved the look of the car I decided on the Mitsubishi Airtrek Turbo, the parts were reasonably priced, plenty of mods available, reliable gearbox and engine and plenty of space.

It’s basically a Mitsubishi Evo 7.5 GTA (The auto variant) with a larger body (same engine, smaller turbo, same chassis, same gearbox) pushing out 240bhp standard. Plus a massive amount of aftermarket parts and mods are available as most Evo 7/8/9 parts just slot on.

So recently I was in the position to get the car, I didn’t have to worry about downpayment as I was trading the Satria in. I just needed enough money to do some repairs on the car and budget for stuff like tyres, timing belt etc.

I started looking around and found Airtreks in various conditions and various mileages, mostly I was looking at 2003 models. Some claiming as low as 40,000km (probably clock wound back) up to massive 180,000km (and not that much cheaper).

I found one with a reasonable mileage and an excellent interior in Puchong, with around 110,000km, 1 owner and original paintwork (accident free) advertised for RM88,800. 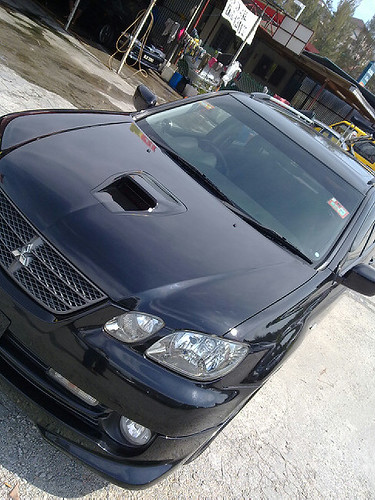 After popping the bonnet, I realized I’d found a good one here when the red painted rocker cover and tomei branded/painted intercooler mount popped out at me.

I also noticed the Raizin voltage stabilizer and a Greddy blow off valve. 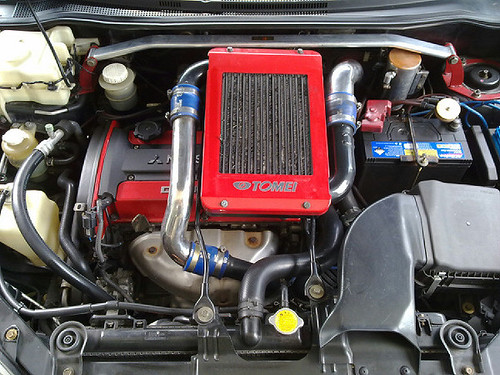 Plus the RalliArt torsion bar, this car had some serious money spent on it and the engine bay was immaculate making me think it had been well cared for.

It had no service history however and I suspected the timing belt and engine mounts needed to be changed.

The gearbox seemed fine tho and the power was still there (boosted to 1 bar), a bit of misfiring tho (probably spark plugs, haven’t diagnosed yet).

They offered me a fair price for my GTi and dropped the Airtrek price to a level I was comfortable with, so I went ahead and signed the papers, the loan was approved by Public Bank and I took ownership of the car last Friday!

Out with the old and in with the new. Say bye bye GTi. 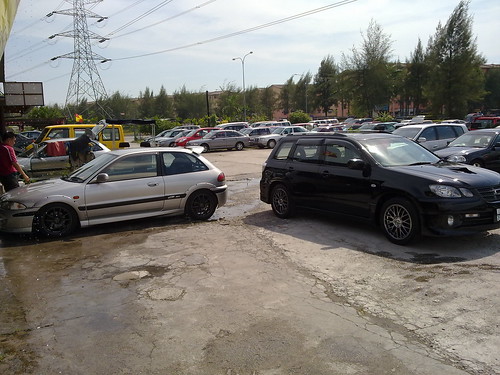 I’ll be having some work done on the car, so I’ll document that soon. Then maybe some mods later – w00t. So far seems to good, I reached a theoretical speed of 200km/h last night whilst testing the car (obviously on a dyno or a private road or something) so the JDM 180km/h speed cut has definitely been removed.

Need to do more diagnostics and testing on the car though to see what has been modified and what needs tweaking/tuning/replacing etc.

20 Responses to Project Airtrek – The Beginning