It’s been a while since I’ve written about my black beauty, a 2004 Mitsubishi Airtrek Turbo – since the first (and terrible) mechanic I had for my car – Project Airtrek — The First Service – Part 2. So here’s my story about the fixing the stalling problem.

I’d spent so much, but didn’t manage to get the car in working order..It still kept stalling – as you can see in this video here, these were the symptoms (hard to start, after a slight revving the car would stall):

It was REALLY annoying, and sometimes terribly embarrassing as it would happen at junctions, when parking etc – so I’d stall in the middle of the road..and it would be hard to restart so I’d be blocking traffic. And in the daytime it was SUPER hot as the aircon would go off.

After going to a new mechanic in a weird back alley all the way in Balakong, he diagnosed the problem within 30 seconds..I found the new mechanic from the Malaysia Mitsubishi Airtrek club (which no longer exists sadly). You know what he did? Started my car and turned the steering wheel, when the RPMs dropped he said straight away it’s the Stepper Motor problem.

The Stepper Motor AKA the ICV or Idle Control Valve also AKA the IAC or Idle Air Control is an odd little piece of kit which regulates your cars idling and also manages the RPM during cold start etc (why you no longer have to step on the pedal when you start a car). This is what it looks like: 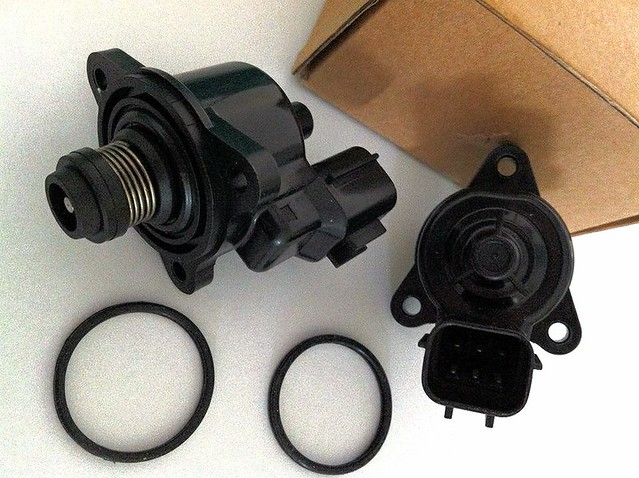 Managed to get a Throttle Body with the ICV attached (and a bonus TPS or Throttle Position Sensor) for about RM500 and get that into my car, boom problems gone.

So at this point I was up to a rather eye-watering RM9200 spent on the car, but to be fair – it was riding pretty well.

As for the Stepper/ICV it’s a lot easier to find now though (and cheaper), there’s even someone selling new ones on ZTH since 2012:

Next up? Cracked manifold (the most common Airtrek Turbo problem) and much much more.