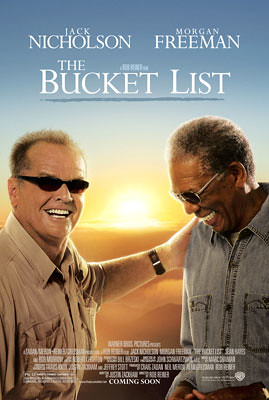 Two terminally ill men escape from a cancer ward and head off on a road trip with a wish list of to-dos before they die.

This is a movie I only heard about after the phrase “Bucket List” swept the Internet recently, a list of things you must do before you kick the bucket – nice eh?

A sad and touching story with a spot of humour and lot about acceptance and human character, it’s sad in some ways happy in others.

Some of the places they visit are truly spectacular, majestic to say the least and the filming of the locations is poignant and moving.

The dialogue between the two main characters is great, Carter played by Morgan Freeman – the downtrodden working class man who had never achieved his aspiration of becoming a history teacher and Cole played by the Nicholson – the flashy, rich, pushy and flamboyant business man. 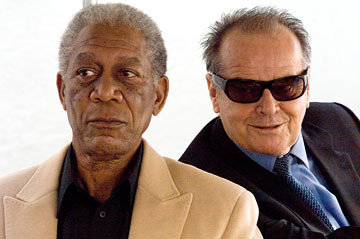 Two quite opposite characters that end up getting along very well. Jack Nicholson tends to play very large characters, often larger than life and this one is no different. He manages to not overplay it too much though and Freeman balances it out with a steady performance through-out.

It’s not the kind of movie I’d generally watch, it’s a bit soppy but it is quite well done. I’d suggest giving it a watch if you want a break from all the fast paced action, cheesy comedy and superhero movies we’ve been seeing lately.

Not Too Bad
Nokia E71 – My Review and Comparison to E61i