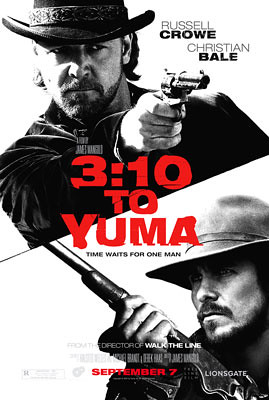 A rancher struggles to support his ranch and family during a long drought. Desperately needing money to build a well, he takes an assignment to transport a notorious felon, in the hands of authorities, to Yuma for imprisonment. But, once the two meet, the criminal tries to tempt him with–in exchange for allowing him to escape–an offer of much more money than the rancher ever expected, the result of a hidden loot.

This movie is actually a remake of a classic 1957 cowboy flick of the same name, exactly 50 years after the original a star-studded remake appeared and took the cinemas by storm. It shot straight up in IMDB and is currently Top 250: #227 with a rating of 8.0/10 (47,816 votes) – pretty impressive eh!

The movie itself is a good old-fashioned cowboy movie that we haven’t seen of for quite some time (do you count Brokeback?). It had ranchers, gun slingers, bad guys, good guys, sexy bartenders the whole works.

Crowe played the ice cool brooding bad boy of the cowboy world, he was smooth as butter with the ladies and relentless when it came to killing. He fitted the role very well.

Christian Bale demonstrated once again he is one of the best leading male actors out there, the way he commanded the screen and displayed such depth to his character was amazing. The interaction with his son was great and you really felt like you got to know Dan Evans. 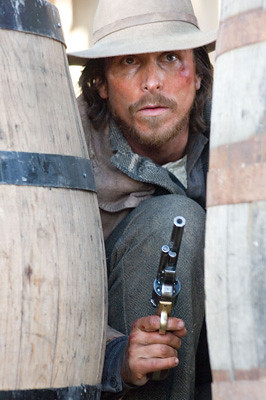 Last but not least was Ben Foster as Charlie Prince who had a very memorable performance for me in Alpha Dog, he dominated the screen and there hasn’t been someone as badass as his character for quite some time. He’s definitely going to be one to watch.

The cinematography is just beautiful and the pace just right, it really takes you back to the heyday of Western movies.

All in all the movie has some good underlying morals and an interesting plot, how far would you go to be seen as a hero by your son? And even the bad have a good side….and vice versa.

It’s definitely a movie you have to watch, the best movie I’ve seen for quite a while.