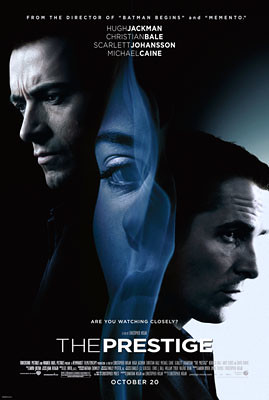 A mysterious story of two magicians whose intense rivalry leads them on a life-long battle for supremacy — full of obsession, deceit and jealousy with dangerous and deadly consequences. From the time that they first met as young magicians on the rise, Robert Angier and Alfred Borden were competitors. However, their friendly competition evolves into a bitter rivalry making them fierce enemies-for-life and consequently jeopardizing the lives of everyone around them. Set against the backdrop of turn-of-the-century London.

I’ll say straight up this is probably the best movie of the year so far without much competition, it’s been a pretty bad year for movies all in all after 2005 which has a clean sweep of great movies, 2006 performed pretty badly, a good sign before watching this movie was the extremely strong 8.2 at IMDB.

It lived up to expectations! KY even joined us to watch it for the second time.

This is a truly allstar cast mixing new talent with old, pitting Hugh Jackman (Robert Angier) and Christian Bale (Alfred Borden) against each other is a work of genius, both have already proved themselves with movies such as X-men and Batman Begins and even more so for Bale with the haunting The Machinist. 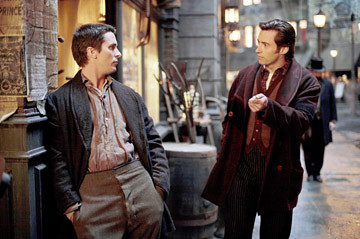 The sparks really fly between them, imagine turn of the century magicians fighting for audiences and fame, Bale (Borden) is the technical expert, the magical genius, but his showmanship lacks the pull to bring audiences..Where as Jackman (Angier) is the opposite, suave, charming and the superior showman, but his tricks are lacking, his technical knowledge and innovation aren’t matching Bale.

Michael Caine of course puts in a stirling performance with his strong screen prescence, a lesser actor would have paled in this supporting role.

David Bowie pops up too, did you spot him?

I can’t really talk about the story without ruining it, just watch out for the the pledge, the turn and finally the prestige. You do have to suspend belief a bit though, it’s not a real story, it has elements of fantasy or sci-fi and stars some great scientists from the same period.

The cinematography, set design, production and direction are top notch, the pacing of the movie is excellent and has multiple narrators, so you see the same things from various views. It’s a dark brooding movie showing the nasty side of human nature.

Christopher Nolan is really showing us what he’s capable of with Memento, Batman Begins, Insomnia and now this!