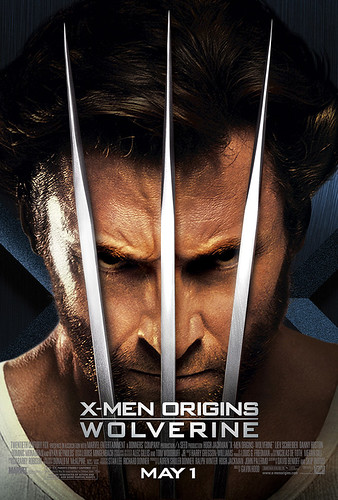 “X-Men Origins: Wolverine” tells the story of Wolverine’s epically violent and romantic past, his complex relationship with Victor Creed, and the ominous Weapon X program. Along the way, Wolverine encounters many mutants, both familiar and new, including surprise appearances by several legends of the X-Men universe.

I’ve been looking forwards to this film for quite a while, having been a fan of the X-men series and the last one being in 2006 – X-Men III: The Last Stand.

After seeing it, I wish I’d watched it at the cinema! It’s quite an action flick. It got some bad reviews and the IMDB score is reasonable but I really enjoyed it.

Hugh Jackman is a solid Wolverine, no complaints there and it’s good to see Liev Schreiber, he’s getting some great parts and is an intense actor.

Ryan Reynolds was a good addition too, he’s a smart guy and plays the funny/serious roles well.

Cinematography was superb and it was generally a fast paced film, even with the romantic subplot it played out well. Acting was good all around, nothing to complain about really.

I just need a bigger TV to watch it again in HD glory!

If you haven’t seen it I definitely recommend giving it a watch, it’s a must see for action fans and fans of the X-men franchise.