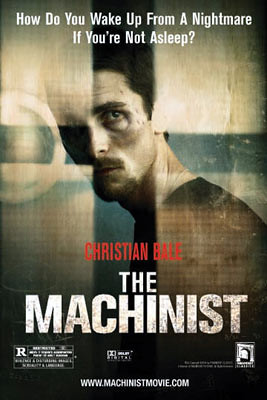 THE MACHINIST is the story of TREVOR REZNIK, a lathe-operator who is dying of insomnia. In a machine shop, occupational hazards are bad enough under normal circumstances; yet for Trevor the risks are compounded by fatigue. Trevor has lost the ability to sleep. This is no ordinary insomnia…

The Machinist[/url] is a great movie (it rolls in with a 7.7 on IMDB at time of writing), I only came to find out about it as it was shown on the ‘International’ screens at GSC, and the poster looked intruiging. Christian Bale is almost unrecognisable from his bulky muslce-bound Batman figure.

Christian Bale lost an amazing 63 lbs. for this role, making himself into a skeletal shell of 120 lbs. for his creepy potrayal of Reznik in this movie. 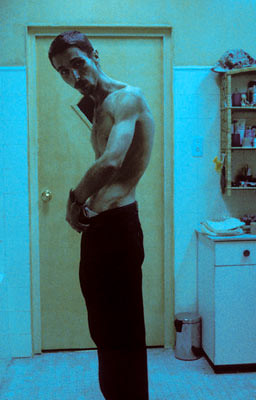 I will say though, this is definately not mainstream popcorn cinema, if you like films like Memento, Pi, Magnolia, Donnie Darko and Saw, then you will like this. The story plods a little, but you have to appreciate the sheer genius of the cinematography, character development and directing. It is very Hithcock-esque in parts, and has a bit of a Hitchcock feel to the whole thing.

It’s basically a story of a man, a machinist (operating heavy factory machinery) who having terrible insonmia hasn’t slept for a year, he loses weight rapidly, and starts to lose his grip on reality, he doesn’t know what is real and what is not, a scary devilish character with a wicked grin shows up to torment him more (Ivan).

The movie establishes new plotlines and new characters so smoothly you don’t feel any transition, it is I would say fairly much a masterpeice.

If you are into Brittney Spears and Spice Girls movies however, I’d say you should probably avoid this.

Cooking Sausages and Mash at home!
Want some cheese with that WHINE? Blog Police..

15 Responses to The Machinist – Dark and Disturbing (Maquinista, El)