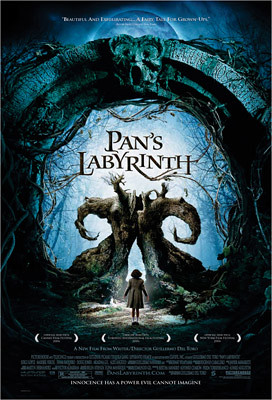 “Pan’s Labyrinth” is the story of a young girl who travels with her pregnant mother to live with her mother’s new husband in a rural area up North in Spain, 1944, after Franco’s victory. The girl lives in an imaginary world of her own creation and faces the real world with much chagrin. Fascist repression during the first years of Franco’s dictatorship is at its height in rural Spain and the girl must come to terms with that through a fable of her own

As the end of 2007 came to a close, I went through the IMDB top 250 list for 2006 and 2007 to make sure I hadn’t missed anything. I found a couple of movies I hadn’t seen yet such as Children of Men and Pan’s Labyrinth – plus a few more which I haven’t watched yet.

Rarely a foreign language movie makes the list, but this one did. In parts it was over-hyped (20 minutes standing ovation at Cannes? Won 3 Oscars. Another 61 wins & 55 nominations) but it was well justified in most parts.

It is a Spanish language movie, but it’s not overly dialogue based. It’s a very visually rich film with stunning cinematography, it has some kind of dualistic nature too. Some might expect the dualism to be the Fantasy world of the princess and the real world Spanish fight against fascism. The fact is the dualism is the contrast between the two, it’s almost like it’s a war movie AND a fantasy movie.

Both elements are captured beautifully and they fit together so masterfully, there’s not a lot of new subject matter here…but the way in which the movie plays out is seamless.

Ivana Baquero is fantastic as Ofelia and the monsters and the faun are believable. The movie is sometimes wonderful, sometimes terrifying. 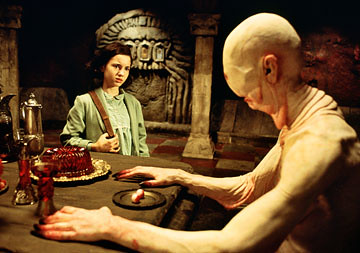 There are some moments of extreme violence, which if are you are squeamish you may find hard to stomach. Somehow they don’t feel exploitative though.

Sergi LÃ³pez as the Captain is just fantastic, showing his many sides, his psychosis and his flaws. Maribel VerdÃº is also excellent as Mercedes, the head housekeeper.

If you haven’t watched this movie yet, you definitely should!