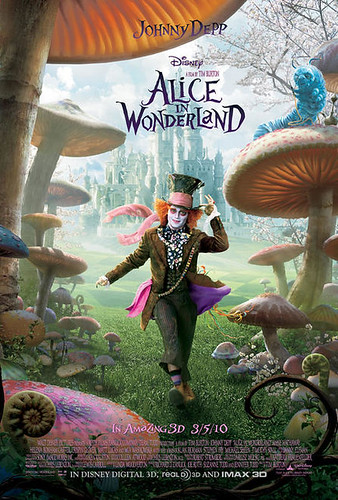 19-year-old Alice returns to the whimsical world she first encountered as a young girl, reuniting with her childhood friends: the White Rabbit, Tweedledee and Tweedledum, the Dormouse, the Caterpillar, the Cheshire Cat, and of course, the Mad Hatter. Alice embarks on a fantastical journey to find her true destiny and end the Red Queen’s reign of terror.

Alice in Wonderland is a tale that I grew up with, familiar with all the characters and having read the classic Lewis Carroll book many times. Like in the early scenes with the bottle on the table, I already knew it said “Drink Me” on the label.

I guess having a familiarity with the story and the characters would add to the enjoyment of the film as IMHO it’s not particularly well put together and it’s embellished a little from the original (the whole marriage proposal thing – what was that about?). I prefer the story from the book personally, not sure what their logic was – perhaps trying to make it more interesting for the generation with a 5-minute attention span.

I find it strange too how the live action acting is domination by American’s where as the CGI/Voice talents are predominantly British – I guess talent vs box office recognition? Even though I wasn’t aware of the casting Matt Lucas from Little Britain was instantly recognisable as both Tweedledum and Tweedledee. With some old-school talent like Alan Rickman, Paul Whitehouse, Timothy Spall, Stephen Fry and Babs backing up with the other characters.

The best character for me was Helena Bonham Carter as the Queen of Hearts who for some reason is known as the Red Queen in the movie – simplification I guess? 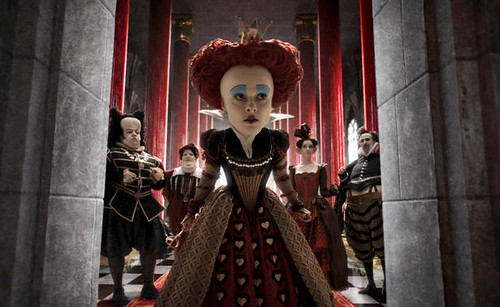 Alice herself seemed a little lacklustre, without much depth or character and older than portrayed in the book (in the book she’s 7 & a 1/2 in the movie she’s 19). Johnny Depp was ok as the Hatter but he wasn’t quite ‘mad’ enough – reminded me a bit of his role in Charlie & The Chocolate Factory.

It’s a decent enough film, not great but not bad either. I wanted to watch How to Train your Dragon…we actually went on Saturday night, but everything was sold out – so we bought for Sunday which was also fully sold out for almost all films. The only thing we could get tickets for was Alice!

Anyway will book this week online sometime for next weekend to watch Dragon and anything else good coming out (gonna give Clash of the Titans a miss I think).

I give Alice in Wonderland a half-way down the rabbit hole 6/10.

6 Responses to Movie Review – Alice in Wonderland – Not Bad