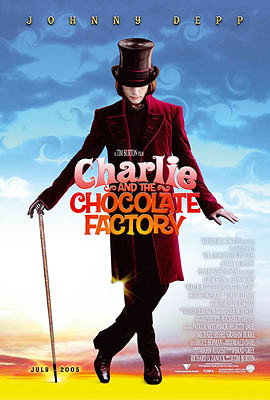 Charlie Bucket comes from a poor family, and spends most of his time dreaming about the chocolate that he loves but usually can’t afford. Things change when Willy Wonka, head of the very popular Wonka Chocolate empire, announces a contest in which five gold tickets have been hidden in chocolate bars and sent throughout the country. The kids who find the tickets will be taken on a tour of Wonka’s chocolate factory and get a special glimpse of the wonders within.

This is classic book read by many of us in our childhoods, Ronald Dahl wowing us all with his magnificent tales. The 1971 version of this film[/url] also featured in my childhood, but it wasn’t so faithful to the book, it was a very nice and ‘sweet’ film. Gene Wilder was far too nice as Willy Wonka, where as Johnny Depp was perfect, crazy mad and eccentric!

The cast was good and the new remake was very faithful to the book, Charlie did remind of the original Charlie, and his family were portrayed excellently. The special effects were very well done and there was ample use of CG although it wasn’t too obvious is most part. The brats were played very well along with this parents, and all totally obnoxious as they should be. 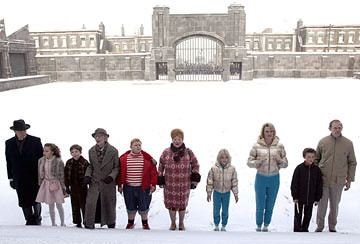 It was directed by Tim Burton, so of course it was pretty dark and twisted, this was played perfectly by Depp who probably freaked out any kids who happened to watch this movie. Especially freaky was when they all arrived at the factory and the main doors opened, I was like WTF?!

All in all I found it to be an entertaining movie and I would definately recommend it.

9 Responses to Charlie and the Chocolate Factory – Pretty sweet!