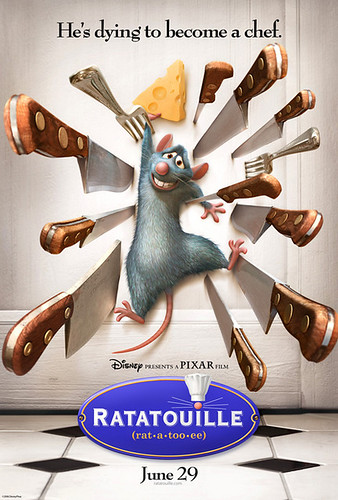 Remy is a young rat in the French countryside who arrives in Paris, only to find out that his cooking idol is dead. When he makes an unusual alliance with a restaurant’s new garbage boy, the culinary and personal adventures begin despite Remy’s family’s skepticism and the rat-hating world of humans.

I’ve been hearing quite a lot about this movie, especially from the Nuffnangers who’d seen it early. I’m definitely a fan of Pixar movies, although they haven’t really wowed me since The Incredibles and Monster Inc.

Straight into the top 250 on IMDB at #73! Quite a few top 250 movies this year, after a poor start to the year the great movies have come rolling in!

Ratatouille is a superb movie! From start to end, the animation is fantastic (sometimes it’s that good they lose the style and it just looks plain ‘real), the story line is good, the voice acting is that good you don’t even think they are voice actors, it’s definitely better to use lesser stars…or they voices start to take over (Hello Shrek). The only really recognisable name is Peter O’Toole as Anton Ego, and he has a fairly small part.

Definitely one of the best animated movies to date.

I think this movie will shake up the animation world, like Toy Story when it first came out. It really got people talking, it’s destined to be a classic. It’s not flashy nor action packed, but it has a real story and real characters.

It’s not much of a kids movie, but I think the kids will love it too, especially the funny moments.

Oh yah, thanks to Melissa from Priority Communications and Intel for the invite and tickets 🙂

Krabi
Back from Krabi