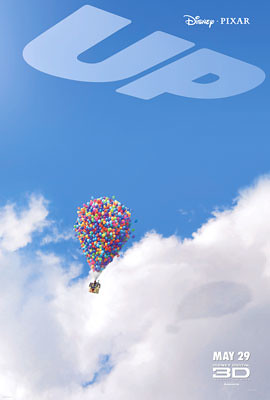 Carl Fredricksen spent his entire life dreaming of exploring the globe and experiencing life to its fullest. But at age 78, life seems to have passed him by, until a twist of fate (and a persistent 8-year old Junior Wilderness Explorer named Russell) gives him a new lease on life.

I’ve been wanting to watch this for a while, being a fan of Pixar films (I just watched Ratatouille again 2 nights ago on HD and Incredibles too!).

I had some time to go to the cinema so I got District 9 and UP watched in one night! Both great films, and both in IMDB Top 250!

Although I’m starting to think newer films get in much easier due to way more ratings than the old films and the sheep mentally of people ratings stuff other people think is good.

Even so, UP is still a great film – definitely one of Pixars best so far.

It’s a very touching story and I love Dug! I just wish EmoCharlie could talk now too so we don’t have to guess all the time what the hell he wants.

I like the fact that Pixar doesn’t use the current ‘big stars’ too, recognisable faces and voices – they tend to use great actors that are not so mainstream.

I mean Christopher Plummer is a fantastic and experienced actor, but I doubt any of the younger crowd have a clue who he is.

It just makes the whole narrative so much more believable and brings the characters to life.

UP is a very touching story, likely to make you both laugh and cry. Definitely worth watching if you haven’t already, and especially for those Pixar fans. I found the pacing a little off tho and there were some lulls where it got a little boring, other than that though it was all around good.

They seem to be on a streak now, with WALL-E and now this.

I’m not sure if I’d say it’s the best movie of the year, honestly speaking I think I enjoyed D9 more than this but it’s definitely up there with Star Trek.

Watch UP if you haven’t already, I give it a balloon filled 8/10.

9 Responses to Movie Review – UP – Cute!