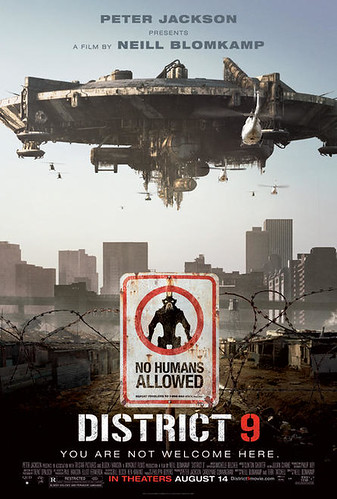 Thirty years ago, aliens made first contact with Earth. Humans waited for the hostile attack, or the giant advances in technology. Neither came. Instead, the aliens were refugees, the last survivors of their home world. The creatures were set up in a makeshift home in South Africa’s District 9 as the world’s nations argued over what to do with them.

I haven’t had the chance to go to the cinema for a while, but I really wanted to see this as I’m a huge Sci-fi fan and there has been a massive lack of decent Sci-fi movies in the last 10-15 years. All the decent ones came out mid-late 80’s and early 90’s. After that what have we had, Matrix? And..there’s been a couple, Dark City, and the only good recent film IMHO has been Children of Men.

Anyway I got the chance to head to the cinema, so I jumped at the chance of watching this and UP (which I’ll review later).

This is truly the first Sci-fi masterpiece we’ve had for a long time, a realistic, gritty, emotive piece of work which pulls you right into the middle of the situation and makes you feel like you are part of it. It’s been a long time since we’ve had something like this, since Blade Runner, since Aliens, since Brazil. Something new and different for once, not a cartoon/game/tv series/old movie remake.

It’s definitely amongst my movies of the year along with Star Trek, UP and some I probably haven’t watched yet.

D9 is most definitely not a typical popcorn, Hollywood blockbuster. The CGI is superb yes, but it’s realistic through-out and there isn’t ONE recognisable star in the whole thing..which is how it should be. You an see why Peter Jackson has put his faith in Neill Blomkamp.

Honestly, I can’t wait to watch it again on BluRay (or at least some HD source). It’ll be a film I’ll watch many times I’m sure as there are more nuances to the plot I haven’t picked up on yet.

I also loved that it was set in South Africa, with their whole Apartheid history it’s almost like watching the integration of the Africans and the birth of the first mixed race child.

If you haven’t seen this, I recommend you go and watch it immediately on the big screen.