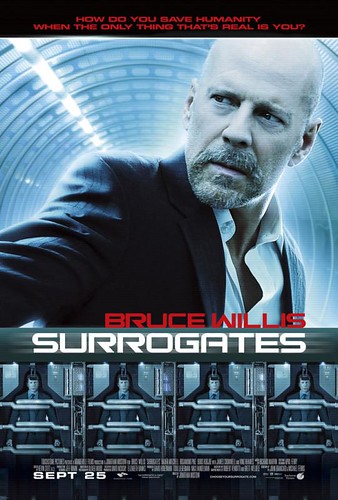 People are living their lives remotely from the safety of their own homes via robotic surrogates — sexy, physically perfect mechanical representations of themselves. It’s an ideal world where crime, pain, fear and consequences don’t exist. When the first murder in years jolts this utopia, FBI agent Greer discovers a vast conspiracy behind the surrogate phenomenon.

Well it’s been a good year for Sci-Fi so far with the surprise that was District 9 and the superb (possibly one of the best films of all time) Star Trek.

This film could be compared to many others in concept, Matrix, Eagle Eye, i-Robot etc. But thankfully it’s different, and it’s not an amazing film but it’s definitely watchable and I enjoyed it.

The basic premise is the same as anything starring Bruce Willis…Bruce Willis saving the World!

No surprise there. It’s got a reasonable score of 6.5 on IMDB (but then I’m starting to doubt the credibility of IMDB scores as some great films get slated and some steaming piles of shite get huge love).

Anyway Surrogates is a decent sci-fi flick, worth watching on the big screen.

If you’re a sci-fi fan, go watch it now!

Picture Published In The Star Today – Without Credit
Arthur’s Day In Malaysia With Black Eyed Peas At Sunway Lagoon!