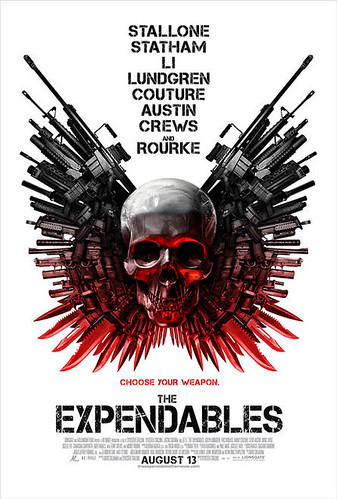 This is a movie ALL action fans have been looking forward to, however ridiculous or bad it was we’d still watch it due to the awesome line-up of action movie legends making up the cast. It’s another movie by Sylvester Stallone, starring…Slyvester Stallone, with the 2nd lead being Jason Statham. And whilst Mr. Statham started out with the classic British cockney con-man roles in Snatch/Lock Stock – he’s become a great action star.

How can you not watch a movie that has Sylvester Stallone, Jason Statham, Jet Li, Dolph Lundgren, Eric Roberts, Randy Couture, Steve Austin, Mickey Rourke, Terry Crews, The Gov (Arnie) and Bruce Willis (even tho the last two are just cameos).

Eric Roberts and Gary Daniels are from those classic 90’s martial arts movies like Full Impact, Best of the Best & American Streetfighter. Anyone who was born in the late 70’s or early 80’s will know EVERYONE in this film and love the style of the movie.

It’s a very ‘Stallone’ film – the pure conviction of the violence is very reminiscent of Rambo IV from 2008 and is very real. Although I can’t say I like the fact they use the new age MTV style of filming some of the fight sequences (handy-cam style with very tight angles so you can’t really see what is going on). I think we can blame Bourne for that trend.

As for the man himself Sly, I defy anyone to find a fitter and tougher looking 64 year old busting out some moves and kicking some arse. 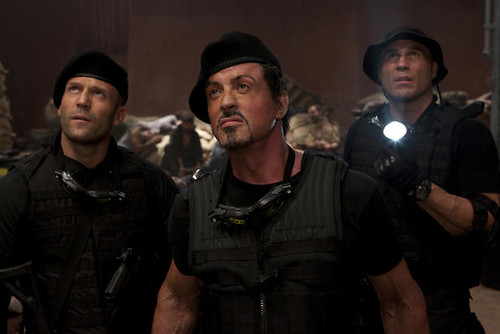 I can say with great conviction that 2010 is a fantastic year for action movies so far with Kick-Ass, which gets it’s butt handed to it by Expendables and A-Team which is about on par with it I think.

I’m so glad I watched this on the opening weekend as I got to see in the huge THX certified ‘Screen 1’ at Tropicana City Mall and it was fantastic, you could feel every explosion vibrating your intestines.

I have to say I think Jet Li had the weakest part in the movie, both his sappy Asian character and his lack of fighting skills. Plus the only casting choice I really couldn’t tolerate was David Zayas as General Garza…to me he’s always the rather comical and not at all scary Angel Batista from Dexter.

Those that were missing for me? Jean-Claude Van Damme, Steven Seagal, Mel Gibson, Cynthia Rothrock & Michael Dudikoff then it would have been complete!

Other than that it was pretty good non-stop action, some decent dialogue and well EVEN MORE ACTION. Just how I like it. I can definitely say the ladies probably wont like this one very much, especially those born in the mid to late 80’s as they won’t know who the hell half the cast is.

But for those guys around my age (which shall remain undisclosed) this has to be one of the most superb movies EVER. I was surprised to see it’s rating is a super high 8.1/10 on IMDB – but then I guess a lot of those rating the movies are male and around my age – so rock on!

I can foresee I’m gonna watch this movie over and over again, awesome! And YES I want an AA-12 Shotgun!