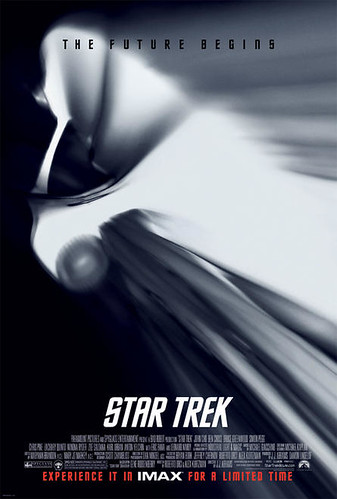 The fate of the galaxy rests in the hands of bitter rivals. One, James Kirk, is a delinquent, thrill-seeking Iowa farm boy. The other, Spock, was raised in a logic-based society that rejects all emotion. As fiery instinct clashes with calm reason, their unlikely but powerful partnership is the only thing capable of leading their crew through unimaginable danger, boldly going where no one has gone before.

This is a true franchise reboot and quite easily the best film of 2009 so far, although the summer blockbusters haven’t really started coming out yet (Terminator Salvation – w00t) this is going to be hard to beat. Unsurprsingly it’s shot straight into IMDB top 250 at #71.

I have to admit I’m not a hardcore trekkie, never was and even after this movie I never will be. I used to watch the original Star Trek series and I enjoyed it a lot, I never got into TNG/DS9/Voyager and I haven’t watched any of the previous 10 Star Trek movies since The Final Frontier (which was terrible).

The casting was spot on, Chris Pine had the perfect swagger and charisma to play the cocky but heroic James Tiberius Kirk.

Some might have some trouble accepting Sylar (Zachary Quinto) as Spock but I thought he played the role very well, I love how they used a lot of figures from popular culture to play the well known characters.

I couldn’t wait to see Simon Pegg as Scotty and he really didn’t disappoint, I was a little surprised to see John Cho from Harold and Kumar as Sulu but it worked really well.

And of course Zoe Saldana was as hot as Uhura should be!

You really don’t have to be a trekkie to enjoy this film, it’s extremely well paced, everything is well explained, there are references for the Star Trek geeks but you can enjoy the film without knowing them.

The plot is good and it’s a really good setup for a new generation of Star Trek fans to be born. Reintroducing all the characters that are somewhat familiar to everyone and setting up the great chemistry between Kirk and Spock.

The cast are signed on for another 2 sequels so we can look forwards to the next one most probably in 2011.