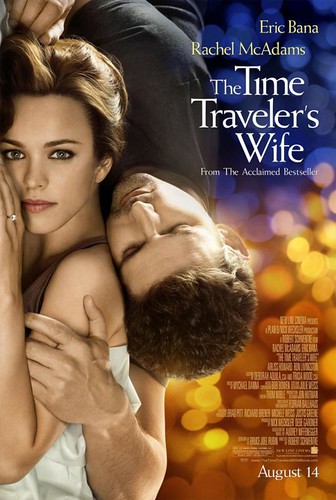 Clare has been in love with Henry her entire life. She believes they are destined to be together, even though she never knows when they will be separated: Henry is a time traveler–cursed with a rare genetic anomaly that causes him to live his life on a shifting timeline, skipping back and forth through his lifespan with no control.

Starting it’s life as a novel from a relatively unknown author The Time Traveler’s Wife became a HUGE success in book form going on to become a bestseller in many countries.

Most who read it felt it would be a fantastic screenplay and were waiting with much anticipation for the news of a movie, the rights to the screenplay were bought by none other than Brad Pitt who was going to start in the movie alongside Jennifer Aniston.

Thankfully (IMHO) that didn’t happen and they cast Eric Bana and Rachel McAdams instead. The movie has had critical acclaim so far and is doing very well with a 7.2 on IMDB. I’d guess within 6 months or so it’ll become a part of the prestigious Top 250.

If you have a propensity to be emo, do grab yourself a box of tissues as you’ll find yourself bawling through-out the movie.

This is one sad film with no happy ending. It’s has no real plot or moral value or anything else you can define tangibly..it’s just a series of events and their effects on a small group of people.

The cast is great Eric Bana plays Henry very well (I’m starting to see him as a very strong actor) and well Rachel McAdams seems to be in almost everything nowdays, she plays the whole romantic emo role extremely well.

The other characters are of little consequence but they do their parts well enough.

It’s a very thoughtfully put together and well directed movie, the cinematography is somewhat muted and suites the film very well.

And thankfully for once lovers of the book are not disappointed, yes there are things missed out but the film is put together very well and successfully breaks your heart within the first 5 minutes.

It’s definitely worth a watch and is without doubt one of the better films of 2009, don’t expect it to be a sci-fi movie as this film is firmly lodged in the drama/romance category.