How To Catch A Rat – Malaysia Style

If you’d been following my Twitter recently you’d have noticed I’ve been having a Rat problem.

I then had a problem with numerous completely useless pest control companies.

They could only catch the rat if it’s dead, remove it from the premises etc. Even though I can SEE it in the TV cabinet, they can’t take it out…they need to put down poison and glue board and come back and take it away when it’s dead.

Jeez, what’s the point in hiring them? I can do that myself. And I can’t put poison down because I have a dog..plus I don’t really want a dead rat carcass stinking it up somewhere.

So well, basically I did, I went to the hardware store and bought 2 rat-traps (Chinese style) for RM8 each, cheaper than I expected.

I got all kinds of suggestions for bait, popular ones were fish head and dried sotong. Other suggested were lap cheong, peanut butter, bread and basically anything stinky.

I dried some kinds of meat, but it didn’t work. Then I thought maybe he’s a vegetarian, because his sneaking around had him eating our cheese biscuits then our pasta. So I googled a bit and it turns out he was a Roof Rat AKA Black Rat (even though they aren’t black but dark brown) and not the large and more aggressive Norway Rat we see in the sewers. They are smaller, have larger ears, longer tails and are extremely agile.

So I had to change tactic. He was nesting in the TV cabinet and feeding in the kitchen. 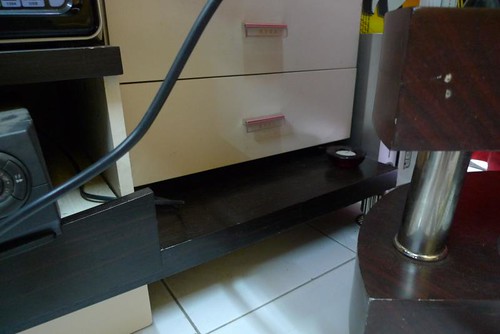 He was below the white drawers above the brown platform, these rats are nocturnal so he only came out late at night to feed (and poop everywhere).

You will know you have a rat in the house if you find little brown nuggets like these all over the place. 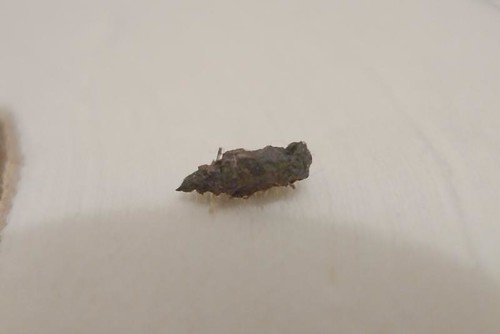 And if you find anything (especially food stuffs) with small holes in weird places, plus you might hear some rustling sounds in the kitchen.

After a while I decided to switch baits, I put some bread with peanut butter in the middle (for some nice scent) then threw some of his favourite pasta at the back to entice him in.

I put one next to the dog food. 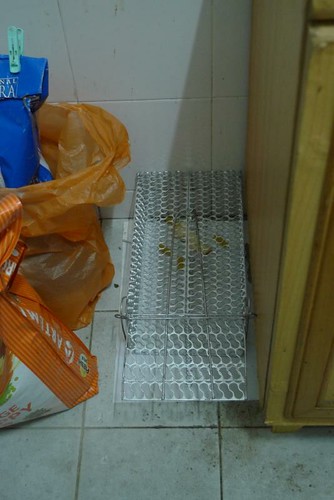 Make sure it’s baited well and whatever you put on the hook is strong enough to trigger the mechanism that slams the door down. The bread was folded in 4 to make sure it couldn’t be pulled off easily. 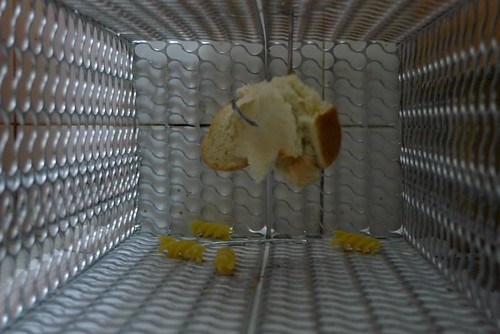 The other was put at a strategic location on top of the toaster, that’s where he found the pasta and in the cupboard above that the biscuits so he favoured that area. 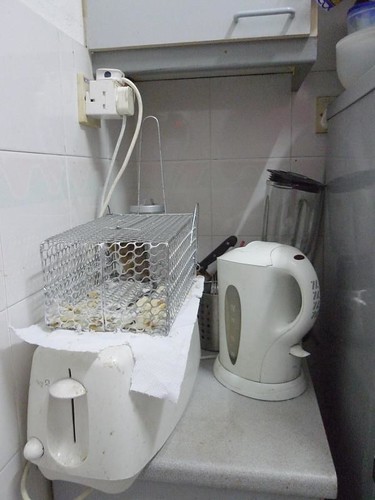 And well after 1 night with this new strategy and bait in place, he was caught! 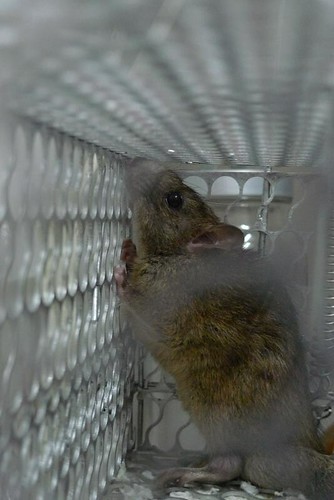 From my research I’d say he’s a juvenile male working alone, probably quite naive and not experienced with traps. So should be easy to trap, and well he was once the trap was put in the right place with the right bait (pasta & bread!).

And we don’t have much of a problem with rats generally because there is a LOT of cats around, and I mean a LOT.

And we definitely don’t have a problem with this rat any more, let’s just say he wouldn’t make much of a SCUBA diver.

27 Responses to How To Catch A Rat – Malaysia Style