It’s been a very stressful few days, I’ve been meaning to blog about this since Friday…but I was busy, then I was asleep, then I was traumatised, then I was depressed about being a dumbass…

The moral of the story is:

a) Concrete walls are stronger than cars

e) Don’t take corners fast when you have extra weight in the back you aren’t used to, the back end WILL spin out 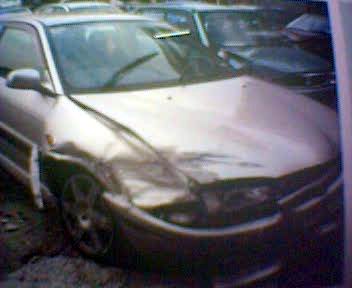 So what happened you ask? I was rushing back from Bangsar after meeting some friends for supper…as it was Thursday night I didn’t want to get home too late as I had work the next day, so I came down towards the lights exiting Bangsar back towards KL, Jalan Johar I think where there is a sharp corner up to join the highway…

I passed the junction and went round the corner, the car skidded round, like a normal tight corner, the tyres squealing, I thought it was going to be ok.. After the apex, the extra weight of 2-passengers in the back pushed the back end out, the car span slightly, oversteering, I fought to get back control and it jack-knifed 3-4 times, I thought I had control back when it flicked at the last minute straight into the concrete wall, there was a flurry of sparks, then stillness, and shock.. 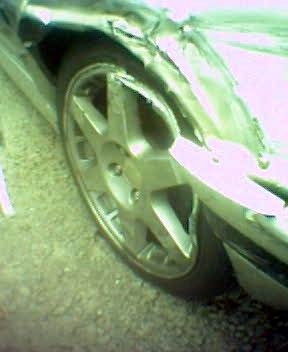 Then 8 guys with walkie talkies and name cards appeared 6 seconds later…suspicious no? They looked so happy too, they were literally cheering, that kinda disturbed me.

I know the corner under the highway to Eastin hotel is known for ‘oily’ conditions, a lot of accidents and these tow-truck vultures..but I didn’t know about this corner, I can’t blame them though, even if they did put oil on the road, I should have been going at a speed that it wouldn’t matter.

There was another wing mirror on the floor beside my car, exactly at the same spot I hit the wall, at first I thought it was mine, but I checked, and mine were still on…looks like they were having a good night.

I have contacts at Thong Hing though, so I refused to let them touch the car unless they got someone from Thong Hing..

The police were there within minutes too, looking for some ‘kopi duit‘, they wanted to get me for drinking and driving, but well they didn’t have a breathalyzer and I wasn’t drunk. So fuck them.

I had no camera and my phone can’t really take pictures at night, so there’s no shots from the incident..These pictures are the from the next day at the repair shop.

It’s going to take 2-3 weeks to repair aswell…because the engine bay got pushed in slightly so they need to take the engine out to straighten it, hit at an akward angle. So I’m kinda carless again, different reason from last time..But I’m hoping to go back to UK in a week or so, so it should be fixed when I get back from my holiday.

I got home about 3am, but was so pumped full of adrenaline I couldn’t sleep…

I kept replaying the incident in my head, running through all the what-if’s…

What if I’d stopped for the red light

What if it hadn’t rained earlier that day

What if, what if…

All pointless as it’s already happened.

Friday was filled with going to the workshop to retrieve some things from my car, thankfully my laptop had been safely stored, and my friends car keys which were in my glove box..

Filled out the forms for the Insurance claim and to authorise the repairs, then headed to the police station to make the report..

I had to pay RM300 for ‘losing control’ and the guy wouldn’t take any discount at all…and I had to pay on the spot because I’m a ‘foreigner’.

After the headed home and slept, slept a lot.

Well that’s my story, a story of a dumbass who drove into a concrete wall.

That’s my lesson, don’t drive into concrete walls, it’s fucking scary, and beware of places that might have oil on the road, because your car will spin like a mofo (look out for a group of towtruck drivers drinking coffee).

I’m just truly thankful no-one was hurt, no other cars were involved, only my vehicle and my ego were damaged.

The Influence of Television – The Devolution of the Mind
Tae Guk Gi: The Brotherhood of War