If you have no idea what Twitter is, it’s basically a ‘microblogging’ service which allows you to push out small bite sized updates (no more than 140 characters). It started out as an SMS based service, but has really moved onto the data platform now with mobile clients improving and data plans becoming more affordable.

If you’re interested you can read more on Wiki here and the CNET here. The best guide I’ve found is here – The Ultimate Guide for Everything Twitter.

My general thought it Twitter has struck at the right time, it’s brought back the spontaneous and fun nature of bloggers. Twitter has really exploded in Malaysia lately and well pretty much World wide (even though with @Oprah joining some say it’s the end..)

Then there was the whole CNN vs Ashton thing that went on and a whole bunch of other celebs jumping on the bandwagon.

In a way this makes my blog less personal and more like a publication, but well that’s how I like it and I like to maintain the quality. I sometimes feel like having a second blog where I can just rant and post any old junk I like…but now I don’t need it because Twitter has given me back that power and more.

That’s what makes Twitter such a versatile tool, it’s really what YOU make it. Twitter has returned the original pleasures of blogging in an informal more instantaneous format.

You could say, well there are already places for these things in blogs such as ‘Asides‘. I toyed with installed Asides on my blog a few times or some kind of “Short Talk” thing but it never really motivated me enough to do it.

You could say Tumblr is the solution, but I beg to differ. Tumblr is great and definitely extremely cool…but I personally find it quite useless.

Most Tumblr blogs are a jumble of quotes, pictures, articles and videos. It’s hard to process the information contained within and if you want to ‘follow’ someone you have to subcribe their RSS and then read their posts in the RSS reader or open a web page to read it (when it might just be one line) – that seems horribly inefficient to me.

Honestly speaking I think Tumblr has a limited lifespan.

Some people are discussing if Twitter is replacing RSS and I would firmly say NO it’s not. They are entirely different platforms.

I am still an avid RSS user and will continue to be, there’s no way Twitter can fulfill my requirements 100% when it comes to what RSS is delivered.

RSS is a pull mechanism, it lets me know when sites I am interested in update. Twitter is a push mechanism, I get told about sites I may or may not be interested in – either way I find stuff I wouldn’t normally see (somewhat like StumbleUpon, or del.icio.us but even more instant).

I adore Google Reader and couldn’t live without it. Which is another reason why Twitter is so popular, it’s not pushing anything away or replacing anything – it’s supplementing.

As for the opposite, how people follow me – I could well see Twitter overtaking, according to Feedburner I have 591 subscribers as of today and I have 276 Twitter Followers, which is almost half way there.

Which is interesting, people obviously favour easily digestible information (which I have written about before – diminishing attentions spans).

The other major reason Twitter is so popular is the amount of services and apps that have spawned around it, the popular examples being:

There are of course many more, those are just a sample of the popular ones plus there are those for specific platforms like WordPress plugins (I use Twitter Tools). If you want a really long list check here.

Then are the clients, once you use a proper Twitter client it will really change the way you use Twitter as you can effectively monitor, engage and influence. Twitter is about communicating not broadcasting, so to use it well you have to engage in conversations.

When using something like Tweetdeck that becomes easy (and addictive). 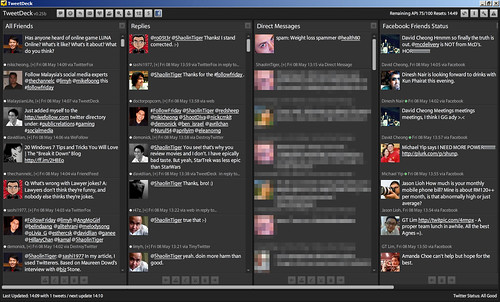 If you want to check out some of the top Twitter desktop clients I’d suggest:

Then on top of that you have a whole bunch of mobile clients for Twittering on the go, this is where the real fun comes in with Twitpic and mobile Tweeting.

All in all microblogging brings back the best parts of blogging without the baggage, I enjoy it again. There’s no pressure to perform, no expectations, no rules or bars – just put out what you want and people will hear it.

If they reply or Retweet or not is another matter entirely, but who cares? Just enjoy it.

And well, I think that’s enough reasons why Twitter is popular no? Remember to follow me @ShaolinTiger!

With my expertise displayed in this post, can I be a New Media Douchebag now?