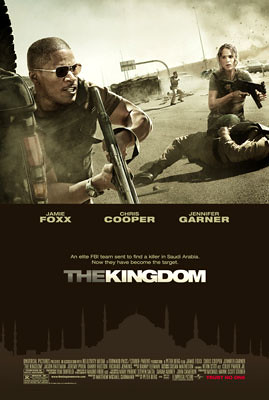 After a terrorist attack to an American housing compound in Riyadh, Saudi Arabia, where families and the spy Francis Manner are murdered, FBI agent Ronald Fleury blackmails the South Arabian consul to get five days of investigation in the location. He travels with agent Grant Sykes, Janet Mayes and Adam Leavitt to revenge their friend and try to find the responsible for the bombing. The agents find all sorts of difficulties in their investigation, but they are supported by Colonel Faris Al Ghazi that advises the team how to act in a hostile environment

I actually thought this was some kind of action movie from the poster, so I didn’t watch it for a while as I didn’t feel like anything mindless (I never did check it out in IMDB where it has a solid score of 7.2).

The day I happened to put it on however I did, and was surprised to find it’s actually a serious movie – somewhat of a political thriller.

Having been to Saudia Arabia before and having spent some time there…it was a little reminiscent, the events in the movie aren’t too far from reality.

This movie follows on from a crop of terrorist/middle-eastern themed movies such as Rendition, Vantage Point and A Mighty Heart.

The movie has more action than the others do and is generally faster paced, so it’s torn somewhere between being an action movie and a political commentary/thriller.

Jamie Foxx once again shows he’s a great actor (but I knew that ever since I saw Ray) holding the lead of Ronald Fleury. 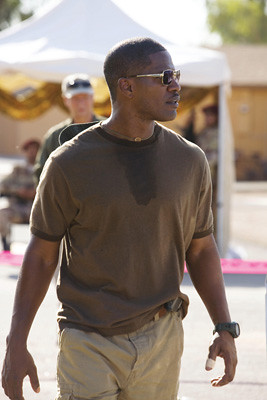 The rest of the cast do a good job with the local police Sergeant Haytham playing an excellent and compelling role.

The action scenes are good and realistic and there are some interesting and scary characters laced through-out the movie.

Of course the bad guys get served in the end..but that’s how the Americans wish it always was.

All in all it’s a decent movie, it won’t win any awards and it’s not particularly memorable in dialogue or scenery – but it’s worth a watch.