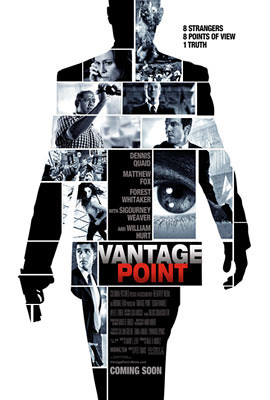 Thomas Barnes and Kent Taylor are two Secret Service agents assigned to protect President Ashton at a landmark summit on the global war on terror. When President Ashton is shot moments after his arrival in Spain, chaos ensues and disparate lives collide in the hunt for the assassin. In the crowd is Howard Lewis, an American tourist who thinks he’s captured the shooter on his camcorder while videotaping the event for his kids back home.

Vantage Point has gotten quite a lot of hype, it’s very topical (terrorism) it’s quite original (same event 8 unique points of view) and it has a fairly good cast (Dan Quaid, Forest Whitaker, Sigourney Weaver etc). Even though you could say it’s also a bit like Rashomon (4 view points of the same story).

It’s a bit slow to start with the first few “Rewinds” not giving a lot of interesting information about the story, so it’s a little repetitive…by the 3rd or 4th “Rewind” the people in the cinema had started laughing wtf.

Anyway it was getting interesting by then…but it reminds me why I hate going to the cinema, because people are noisy and annoying, they take their kids into late night shows…and it’s bloody cold!

I prefer GSC btw, but they had all sold out, so tried at TGV – unsurprisingly they had loads of space.

The movie is pretty good, the acting is solid, the action is good, there are some believable and compelling characters, the camera work is a bit shaky if you are prone to motion sickness though. 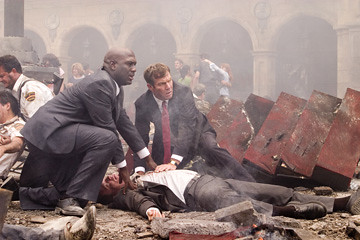 There’s some action, drama, touch of romance, humanity, politics and current affairs. It’s definitely worth a watch and definitely a movie you should catch on the big screen.

One thing I would say which stems from the above, is it’s trying to do too many things, some of which a bit convoluted…too many characters which you don’t really get to know and too many double/triple crosses.

It was between Jumper and this…this being the first choice.

I give Vantage Point a watchable but not amazing (fairly predictable) 5.5/10 (Hello it’s no Bourne Ultimatum).