Movie Review – I Am Legend – Jumpy 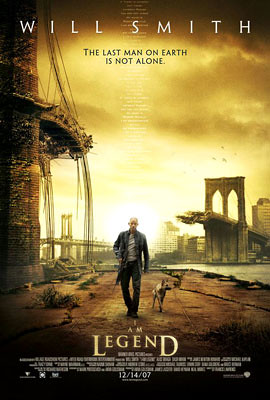 After the outbreak of a lethal virus in 2009, in 2012 U.S. Army virologist Lieutenant Colonel Robert Neville is left as the last healthy human along with his trusty dog in New York City and possibly the entire world. For three years, Neville is trying to discover a cure for this disease and to find out if any other people might have also survived. But most of humanity and transforms the rest into monsters, perhaps mankind’s last, best hope, Neville is driven by only one remaining mission: to find a way to reverse the effects of the virus using his own immune blood.

I somehow had a feeling this movie wasn’t good, I had no idea what it was about at all – and still had no idea when I watched it. I thought it was a love story or something, I was quite surprised when it got exciting and made me jump!

The jump factor was surely enhanced by the fact I completely wasn’t expecting anything scary! I don’t know why I thought it was bad either – it got pretty good marks on IMDB. It’s actually based on a book, a 1954 Science Fiction novel by Richard Matheson of the same name “I Am Legend“. This is the third time it’s been made into a movie.

In some ways it reminded me of Tom Hanks Castaway – Will Smith really carried this movie and he showed what a power house actor he really is, he and his dog Sam. It’s hard to find conflict when you are alone on screen and this is a big movie with a big void Will had to fill.

He did the job admirably! He really brings Robert Neville alive. 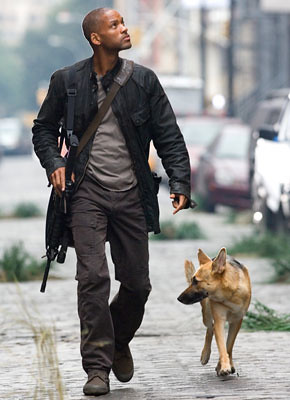 This is a big budget movie, but only one main actor – the support cast are not big stars. There are plenty of extras tho and special effects, the soundtrack is good and the effects well executed.

It’s a gripping movie that keeps you interested all the way through. A lot more could have happened though, more character development, more about Neville coping with his solidarity and his insanity creeping up.

It is scary, it’s convincing and it’s gripping – if you haven’t seen it, it’s definitely worth a watch!

You can check out the alternate ending here, it’s very cheesy tho – I’m glad they stuck with the one in the actual movie. The fans say however the alternate is more realistic and sticks to the book.

10 Responses to Movie Review – I Am Legend – Jumpy