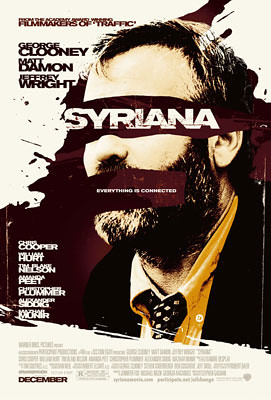 Syriana is a thriller of corruption and power related to the oil industry that tells four parallel stories: the CIA agent Bob Barnes (George Clooney) with great experience in Middle East that falls in disgrace after an unsuccessful mission dealing missiles in Lebanese Republic; the investigation of the attorney Bennett Holiday (Jeffrey Wright) related to the merge of two American oil companies, Connex and Killen; the traumatic association of the energy analyst Bryan Woodman (Matt Damon) with the son of a powerful emir of Iran; and the social drama of the Pakistani immigrant worker Wasim Khan (Mazhar Munir) that is fired by the oil company.

I’ve got a LOT of movies to catch up, so I’ll bore you with some of the reviews.

Syriana was one of those big hyped movies from 2005, Oscar nominations, these awards, those awards etc etc. I was expecting a lot from it.

Frankly the first 20 mins was a complete yawn-fest, I almost turned it off, I know someone that did fall asleep and someone else that did actually turn if off half way through.

It’s a shame as it does get very much better after that.

It’s an intricately woven tale showing the picture from the ground level with Pakistani workers being laid off in the oil fields, the political level, and the level of normal people like you and I with George Clooney and Matt Damon getting involved for vastly different reasons.

It’s a deeply political film and very nicely linked together but slow in parts, it’s definately thinkers film and is closely related to many of the things that have happened in recent times..

I believe it was banned in Malaysia due to some of the sensitive issues it addressed.

The acting was top notch, it’s good to see Clooney taking a meaty role and once again Matt Damon showing his versatility. 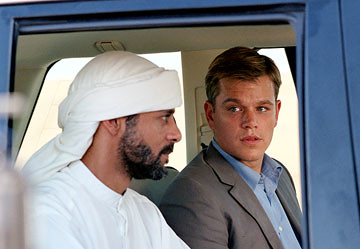 Serious and tense it is, light-hearted it is not.

You have to give it some time and get into the plot, the twists, the power struggles and the back-stabbing. It was based on a book which was apparently based on a real conflict, I have yet to look up who the prince was..but it’s certainly interesting.