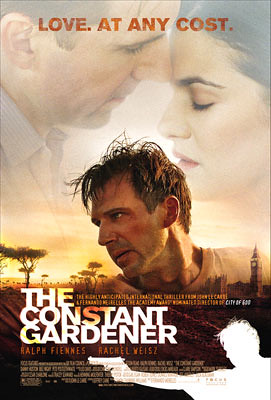 In a remote area of Northern Kenya, the region’s most dedicated activist, the brilliant and passionate Tessa Quayle, has been found brutally murdered. Tessa’s traveling companion, a local doctor, appears to have fled the scene, and the evidence points to a crime of passion. Sandy Woodrow, Sir Bernard Pellegrin, and the other members of the British High Commission assume that Tessa’s widower, their mild-mannered and unambitious colleague Justin Quayle, will leave the matter to their discretion. They could not be more wrong.

Another movie I’ve been hearing about for quite some time but I’ve only recently gotten around to watching it.

The director Fernando Meirelles is the guy who came out with the amazing movie City of God, one of my favourite movies aswell (it’s gone straight into #16 on IMDB top 250, it was even in when I watched it first).

The Constant Gardener is a serious film about serious issues, the content is heavy and the acting is breathtaking both Rachel Weisz and Ralph Fiennes put in Oscar worthy performances.

It addresses a the hard hitting topic of unethical mass drug testing on populations of poor countries, it is a work of fiction…but it could be real.

It’s 100% a political thriller and pulls it off perfectly, the reality of Africa hits you smack in the stomach, it’s portrayed in a way that really makes you feel something.

It’s definately a though provoking and intelligent movie dealing with a complex subject. 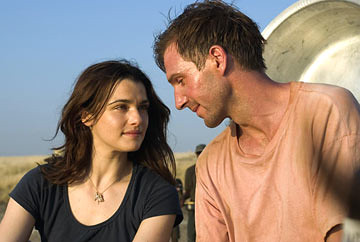 The acting throughout is really top notch.

It uses the City of God kind of documentary filming making it feel more realistic, it’s gritty and hard hitting and the feeling when you watch it will stay with you for some time.

Amazing film, after all the crappy blockbusters last year, you should watch this now if you haven’t and see what a film really can be.

Only in Malaysia 2 – The Egg Man
Get New Friends Like sai_baba With Fo.rtuito.us BETA!