Movie Review – Fantastic Four: Rise of the Silver Surfer – Better than the first 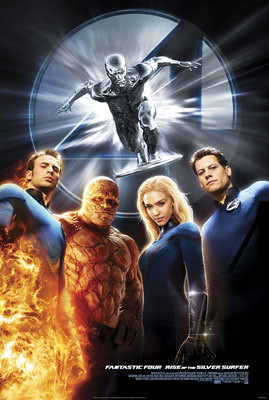 After the death of Dr.Doom the Fantastic Four think life is back to normal. Reed Richards and Sue Storm make plans to get married, but are interrupted when the Silver Surfer and Galactus show up, trying to destroy the earth and it’s up to the fantastic four to deal with them, as well as with the return of Dr. Doom.

Ah another sequel, at least it’s not another lame part 3 like Pirates and Spiderman 3 (I haven’t watched Shrek yet, and I’m looking forwards to Bourne Ultimatum).

I was that uninspired by Pirates I didn’t even review it.

It got a pretty strong 6.7 at IMDB, which is a fairly good sign.

I have to say it was definitely better than the first, but then that’s not really difficult is it? It was equally as lame, loud, brash and stupid. But then it’s Fantastic 4! 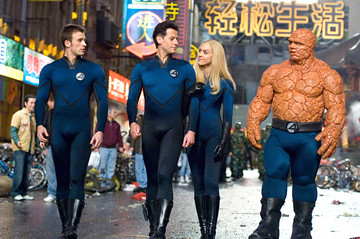 There was the right amount of bickering and family values in the gang, and the chemistry between Torch and Thing was really nice.

The whole wedding fiasco was an interesting sub-plot too and the romance wasn’t over-cookd like most recent movies. Galactus and Silver Surfer were expected to turn up sooner or later, and it was close enough to the story to keep fanboi’s happy. Although not perfect, the characters were introduced decently well.

The most surprising thing for me was the inconsistent special effects and CG which in some parts looked quite bad…for such a big budget movie, they seemed to blow everything on the Surfer himself and sometimes forget the rest.

It’s not a great movie and it’s not a bad movie, but it’s very much in the middle somewhere.

What was with Jessica Alba’s hair anyway…it looked like nylon. Screaming out for a shampoo sponsorship.

The Eye on Malaysia – Taman Tasik Titiwangsa – Fireworks!
I Miss Those Crab Feasts…

5 Responses to Movie Review – Fantastic Four: Rise of the Silver Surfer – Better than the first