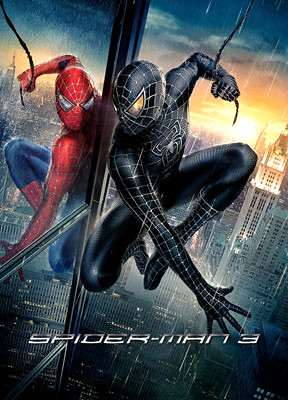 Peter Parker has finally managed to strike a balance between his devotion to M.J. and his duties as a superhero. But there is a storm brewing on the horizon. When his suit suddenly changes, turning jet-black and enhancing his powers, it transforms Peter as well, bringing out the dark, vengeful side of his personality that he is struggling to control.

Oh dear, another lame Spiderman 3 review, well I just wanted to add my opinion, although I doubt it will differ greatly from anyone elses.

It’s done surprisingly well on IMDB with 7/10 and on Yahoo! Movies with B-.

It busted some takings records too, the superhero sequel grossed $151.1 million, per Sony, establishing a new opening-weekend record and earning more in 72 hours than recent hits such as Click, The Departed and Borat made during their entire runs.

There as good and bad in the movie, overall I went in with pretty low expectations as everyone that had seen it said it was pretty bad.

I tried really hard to enjoy it, I did…but after the first 45 minutes or so I just got tired of trying and gave in to the mediocrity that was Spiderman 3.

Why 3 villains? Why the stupid metro slapstick part in the middle? Why the convoluted love story? Why did the butler wait so long to tell Harry? It would have saved a hell of a lot of trouble in the second movie.

The action was great and the special effects phenomenal, especially the scenes with Sandman…really splendid.

But the rest was bleh, the movie dragged like hell, especially the middle part.

We already know Peter Parker and MJ, where’s the proper character development for Venom and Sandman?

I guess most people left the movie wondering what exactly had transpired and why as the storyline (if you could call it that) left a lot to your imagination.

Apparently Venom wasn’t supposed to be in the 3rd movie, he was penned for the 4th, but somehow they managed to squeeze him in.

There was some funny moments, great action sequences..but a lot of yawns, there’s no real reason to watch this movie for a second time unlike Spidey 1 & 2 which can be watched over and over as you really get to know Norman Osborn (Green Goblin) and Otto Octavius (Dr Octopus).

It has a big budget, and it’s fancy, but it leaves me feeling unsatisfied.

I’d give it a barely tingling Spidey Sense of 6/10.