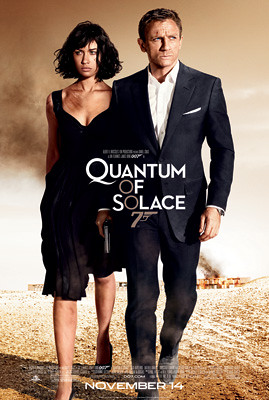 Betrayed by Vesper, the woman he loved, 007 fights the urge to make his latest mission personal. Pursuing his determination to uncover the truth, Bond and M interrogate Mr. White who reveals the organization which blackmailed Vesper is far more complex and dangerous than anyone had imagined.

I was looking forwards to this movie (the 22nd Bond movie) since I heard about it way back when with the new kickass Bond played by Daniel Craig. Casino Royale was spectacular and I just watched it again today before going to see Quantum of Solace (and it was just as excellent as the first time).

It scored pretty well on IMDB with 7.2 (a score I think is a little high considering the depth of the movie).

Somehow it didn’t feel like a Bond movie, the signature opening gunbarrel sequence at the end of start credits was absent, the signature tune was weak and not really memorable (although they keep it current with Alicia Keyes). Then the movie itself, where were the gadgets, the smoothness? The character developement? The sinister bad guy? The wit and humour?

It seems like it’s turned into another conspiracy theory movie and it reminded me of The Bourne Ultimatum far too many times (but then they hired the editor, the stunt team and 2nd unit director of the Bourne movies…so what do you expect). I don’t think the whole MTV-style ‘gritty’ editing really suites Bond. It should have a less frenetic, more interesting pace.

It basically needs a whole lot more depth, like the Poker scenes in Casino Royale and the rest of the sizzling dialogue – this movie seemed like a bunch of high budget action sequences strung together.

Of course I love Daniel Craig as Bond, he played his part superbly but there was no real development in the movie, not enough character – not enough ‘Bondishness’. 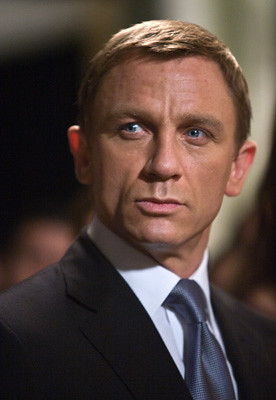 He certainly played the part of the cold blooded killer but he didnt have enough chances to shine as the smooth, suave and charming bond we all know and love. Always time for a quit-witted quip and to charm some hot babe into bed. Talking of hot babes.

Olga Kurylenko showed up later in the movie looking as hot as ever, you might remember her from Hitman – Agent 47, where you get to see the goodies 😀 She’s in Max Payne too, but I haven’t seen that yet.

As for the principle bad guy Greene played by Mathieu Amalric, he just wasn’t bad enough! 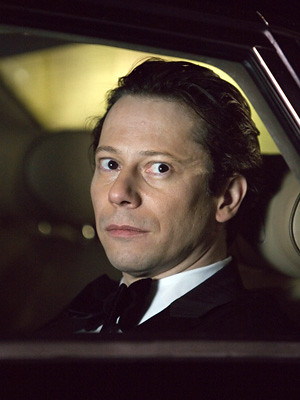 Where are the truly bad guys from the days of Emilio Largo & Goldfinger?

Where are the endearing characters who are always there like Miss Moneypenny?

Where are the freaky twisted sidekicks like Oddjob & Jaws?

Where are the Bond girls with double entendre names like Pussy Galore & Honey Ryder?

Where are the cunning and resourceful escapes?

If you look it as just a movie, it’s good no doubt – but then it should be for $225 million dollars. But if you look at it as a Bond movie, it’s just not Bond.

The ending pisses me off too, it feels like it’s turned into a money leeching franchise…rather than having a proper self-contained plot you get that whole ‘it’s leading into the next movie’ feeling at the end rather than having a sense of completion or wrapping things up.

And I REALLY hate that feeling, it’s the feeling you get at the end of Pirates of the Caribbean: Dead Man’s Chest, it’s almost like the movie is a filler. But then it does go with Bond tradition, a great Bond movie is always followed by a bad one.

I give it a ‘hope it gets better next time‘ 6/10 for being an entertaining action/thriller.