Movie Review – Forbidden Siren – Was it a Comedy? 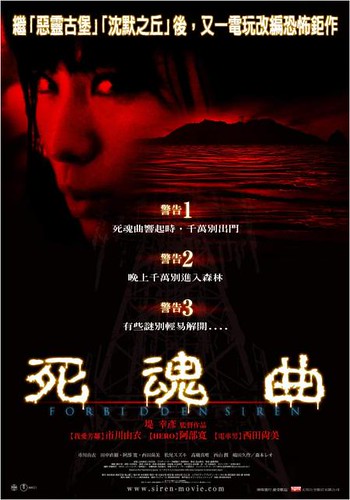 A writer moves to a remote island with his daughter and young son. After settling into their new home, a neighbor arrives to welcome them and give them a breakdown of the local rules; most important: do not go outside when the island’s siren starts wailing.

You can find the IMDB entry for Forbidden Siren here.

I’m not really sure what to make of this movie, it’s somewhat similar to Silent Hill, apart from the fact Silent Hill was actually pretty good for a movie made from a game.

This movie is also based on a game Siren 2 for the PS2, the game was made by the same producer as the Silent Hill game so that gives you the link for the similarities.

After watching the movie I couldn’t make out if it was really trying to be a horror or it was actually supposed to be funny as I laughed all the way through and so did most other people.

It had parts of many movies like The Others, Shaun of the Dead, The Village and perhaps even Hitchcock’s Pyscho.

I doubt it was intentional though.

It’s a shame the film was so bad as the cinematography was stunning, beautiful composition of the shots, framing, use of light and shadows and mirrors.

The sound track was a bit hit and miss and the acting really didn’t require much effort, but most of the time it just made us laugh.

It tries to do the whole twist thing, but doesn’t really work out too well.

Apparently it is a real legend, you can read more about it here & here, the Hanuda & Yamijima Incidents. The island in the movie is real, including the tower and the missing inhabitants.

If it was intended to be a comedy I’d probably give it 6/10, pretty funny, not bad but a bit slow at the start.

As it’s intended to be a horror, I’ll give it a score within it’s genre a terrible 2/10.

Suan had some thoughts on it too.

6 Responses to Movie Review – Forbidden Siren – Was it a Comedy?