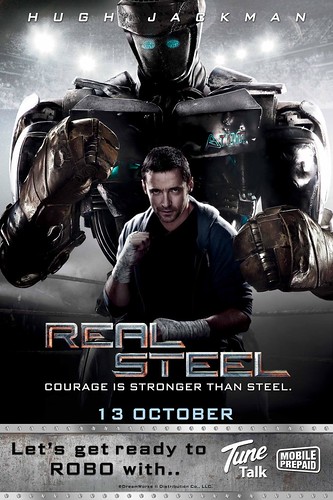 In the near-future, where the sport of boxing has gone hi-tech, Charlie Kenton is a washed-up fighter who lost his chance at a title when 2000-pound, 8-foot-tall steel robots took over the ring. Now nothing but a small-time promoter, Charlie earns just enough money piecing together low-end bots from scrap metal to get from one underground boxing venue to the next.

Heard about this movie a while back, and well anything with Hugh Jackman in it is bound to be pretty good – add that up with some fighting robots and you’ve got a winner in my books.

It’s doing pretty well on IMDB with 7.0/10 – but bear in mind it’s not actually screening yet so that score may well change after 13th October when it hits the big screens. 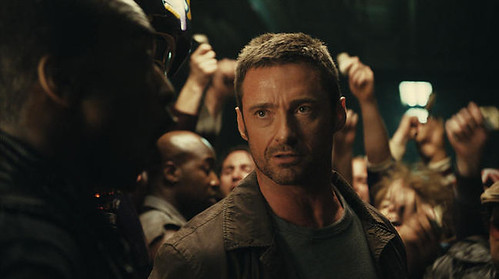 He seems to play that type of role very well..there’s no much other acting going on the film – his son is pretty good as played by Dakota Goyo. He’s cute but not overly annoying.

The main meat of the film is the robots and the interaction between Charlie and his son, there’s are a few supporting roles – one of course being the love interest.

It’s always good when a movie has a hot love interest too, in Real Steal it’s Bailey Tallet as played by Evangeline Lilly and she’s HAWT! 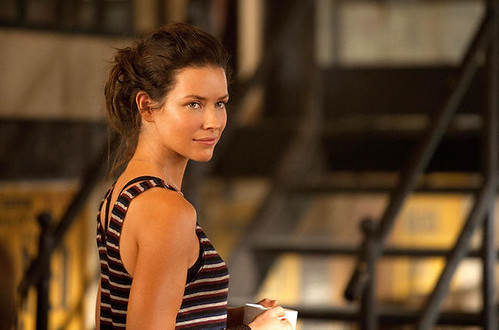 She doesn’t really do much though, adds a bit of relationship stuff to the movie and sits around looking pretty mostly.

And the CG is absolutely stunning, the robot boxing matches are spectacular – even the training scenes involving Atom are just great. CG really has come a very, very, very long way since those early days in the 90s. It looks so realistic now it’s becoming hard to differentiate from live action scenes. 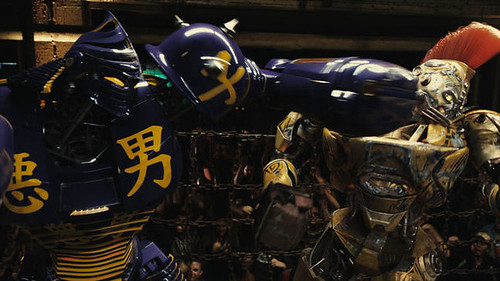 The movie is well paced, the soundtrack is good and there’s a good mix of humour, action and drama. It’s pretty much a regular sports flick, but with robots boxing instead of humans.

This is definitely the best robot movie of the year, I have to agree with eyeris on this one – Transformers 3 just can’t stand up to boxing robots!

And it’s definitely worth watching in the cinema, it’s a very visually impressive movie.

And of course, thanks to Tune Talk for inviting me to the pre-screening!