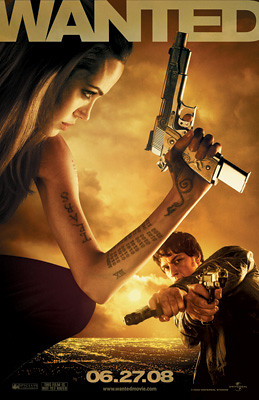 25-year-old Wes was the most disaffected, cube-dwelling drone the planet had ever known. His boss chewed him out hourly, his girlfriend ignored him routinely and his life plodded on interminably. Everyone was certain this disengaged slacker would amount to nothing. There was little else for Wes to do but wile away the days and die in his slow, clock-punching rut. Until he met a woman named Fox.

I actually first knew about this movie when it showed up on a blog I subscribe to, Photoshop Disasters for a freakishly long forearm. Before that I hadn’t really heard of it..but when I saw the trailers and all I thought it looked a bit cheesy, it had a decent cast (Angelina Jolie and Morgan Freeman) though so it should at least be worth a watch.

I somehow got the impression it was going to be quite poor, it was better than expected, but certainly not great. It reminded me a lot of Fight Club the downtrodden ‘normal’ guy ‘Wesley Gibson’ played by James McAvoy certainly made me think of Edward Norton in Fight Club.

He played the part well though, turning from a normal guy into a badass within a relatively short timespan. In some ways it’s a lot like Matrix too, some may call it the poor mans Matrix with McAvoy being Neo, Jolie very much being Trinity and Morgan Freeman as Morpheus.

Jolie was the hot assassin badass bitch that kicked ass all over the place whilst looking flawless, you do of course have to suspend all belief to enjoy this movie..Her role reminded me a bit of how she played in Mr and Mrs Smith.

And of course the striking resemblance to the hot female mentor in Matrix..Trinity. 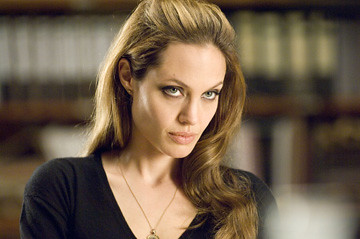 All in all the action was good, it was a pretty entertaining film. It scores a high 7.1 on IMDB but honestly I didn’t think it was that good. It’s not exactly original or difficult to work out the ‘twist’…it’s just a fun popcorn movie.

The special effects are nice, there are some cool moments, the characters play their parts suitably well and there is a couple of cool lines. It has some dark humour and some good action moments, it could have been better, but I did expect it to be much much worse.

A Trip Up The Hill and a Ride on West Somerset Steam Railway
A Round of Mini-Golf and a Cream Tea in Dunster!