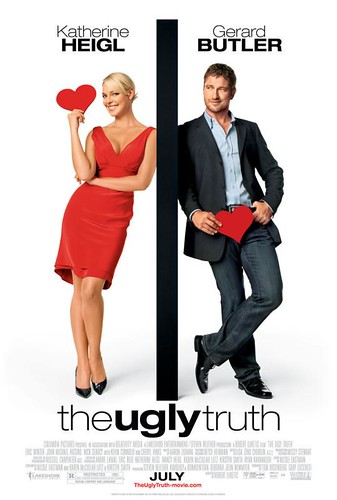 Abby Richter is a romantically challenged morning show producer whose search for Mr. Perfect has left her hopelessly single. She’s in for a rude awakening when her bosses team her with Mike Chadway, a hardcore TV personality who promises to spill the ugly truth on what makes men and women tick.

There hasn’t really been any decent comedies this year so I was looking forwards to catching The Ugly Truth.

It’s got a decent rating on IMDB with 6.6 and everyone that saw it (guys included) said it was entertaining so I definitely felt it was worth a watch (and of course Katherine Heigl is hawt so that’s reason enough to watch).

Gerard Butler is refreshingly different from what you are used to (looks like he put on some weight for this) and the chemistry between him and Katherine Heigl is believable.

The story is nice enough and fairly predictable, the pacing is good and the dialogue is witty and crude just how I like it.

Nothing much to comment on when it comes to sound stage or cinematography for these kind of films as it’s not really a concern.

I’m glad I watched the uncensored version though rather than catching it at the cinema.

All in all it was an enjoyable film and I’d recommend it to anyone looking for something fairly light and easy to watch (too many heavy movies lately).