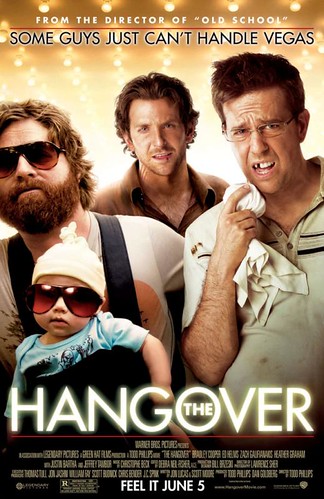 Two days before his wedding, Doug and his three friends drive to Las Vegas for a blow-out bachelor party they’ll never forget. But, in fact, when the three groomsmen wake up the next morning, they can’t remember a thing. For some reason, they find a tiger in the bathroom and a six-month-old baby in the closet of their suite at Caesars Palace. The one thing they can’t find is Doug.

I heard a lot about this film before finally getting to watch it with about half of the #porkgang at my house. It has a storming score of 8.0/10 on IMDB and I think within the next few months it may well creep into the Top 250.

After watching it I have to say it’s definitely one of the best comedy films of 2009. It’s like a very much more grown up version of the 90’s roadtrip movies, or an Apatow movie that doesn’t degenerate into lame fart jokes and slapstick.

It’s an interesting twist on the old bachelor party genre too which generally explores the night itself where as this movie explores the day after.

The acting is great and the Las Vegas scenery is well captured, some characters are unforgettable like the naked Chinese man and his jaw-dropping dialogue.

All in all it’s a great movie, especially to watch with friends and enjoy the laughs together.