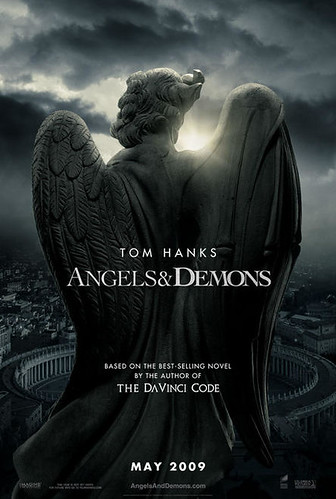 When Robert Langdon discovers evidence of the resurgence of an ancient secret brotherhood known as the Illuminati — the most powerful underground organization in history — he also faces a deadly threat to the existence of the secret organization’s most despised enemy: the Catholic Church. When Langdon learns that the clock is ticking on an unstoppable Illuminati time bomb, he jets to Rome, where he joins forces with Vittoria Vetra, a beautiful and enigmatic Italian scientist.

Whatever people may say about Dan Brown, he can write. I’m not saying he’s masterful or poetic, but he knows how to churn out compelling, easy to read mainstream crap.

He hooks people with the religion and the history (most of which aren’t familiar enough with it to know some is bogus). But then that’s the mark of good fiction (outside the realms of Fantasy and Sci-Fi of course) isn’t it? To blend the real with the faux seamlessly.

And after Davinci Code, now we get to watch Angels & Demons. It has a fairly high rating on IMDB, but I think that will go down over time as more people will brains rate the movie.

All in all it’s a decent film, it’s quite long but the pacing is reasonable. It feels like a thriller more than anything else and it tries to be as gripping as possible (dashing from beautiful location to beautiful location).

As Eyeris mentioned, Tom Hanks definitely has much better hair this time around.

And the anti-matter genius just happens to be a hot chick (not as hot as Audrey Tatou though). Ewan McGregor is great as the Camerlengo, I really think he’s growing as an actor and I hope to see him take up more serious work (No more Dan Brown pls).

After Star Trek though everything is tending to seem a little underwhelming, I haven’t seen Wolverine or Terminator yet (and haven’t heard good things about them either).

There’s not much plot to speak of in Angels & Demons but then that’s what you expect from the franchise, don’t expect a masterpiece and be forgiving.

It’s the kind of movie a 5-year old will be awestruck by, so let that inner child enjoy the film and don’t be a mean old whingebag.