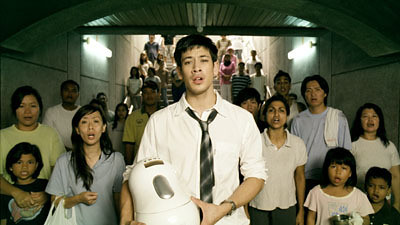 Her name is Rafflesia Pong, a bottom-ranking arts show host who’s disillusioned with “those over-rated underachievers we call artists.” He’s Eric Tan, a product designer who’s just about to learn that it doesn’t pay to be creative. They both work for FONY, a multinational conglomerate whose mission statement, copied from a Taiwanese company, is to be original.

This movie has been around for quite a while and netted itself a number of awards around the World, oddly enough though it’s only launching in Malaysia in May 2009! It’s the first Malaysian movie to secure a theatrical release in Italy.

Anyway after viewing the trailer I was quite interested to see the movie and headed down to check out the premiere earlier this week.

The trailer is here:

The movie is a brave effort crossing a number of genres and not having an real plot to hold them together. It’s more of a statement about art, society and Malaysian culture (there are a LOT of cultural references) and it takes swipes at film awards, indie film makers and shady business practice (why innovate when you can copy!).

The lead actress Jerrica Lai playing Rafflesia Pong is excellent, I think she had a theatrical background which helps in this kind of slightly over-the-top film.

The lead guy Peter Davis was kind of emotionless, he reminds me of a pan-asian Keanu Reeves.

Hannah Lo was quite frankly terrible, she should stick to modeling – I don’t think acting is her forte.

Overall the film was enjoyable, it made me laugh and it started out extremely strongly. Some parts were plain lame and too long (draggy in places – fat boy running up the escalator, 2 old ladies fighting for the taxi etc.) and sometimes it felt like it was just trying too hard (heart disease guy).

The originality of the jokes wore a little thin too as they were overused far too much (especially those which aren’t really funny like “Don’t but me..”).

I’m not sure how the spontaneous songs will go down as in my experience Malaysians don’t tend to enjoy musicals as they haven’t been brought up with them (most people thought Sweeney Todd sucked for example when in fact I thought it was quite good).

Anyway this film is definitely worth a watch, it’s quirky and the best Malaysian satire you’re likely to see for a while so do check it out and support the local movie industry.