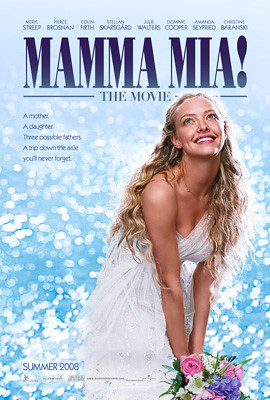 Donna, an independent, single mother who owns a small hotel on an idyllic Greek island, is about to let go of Sophie, the spirited daughter she’s raised alone. For Sophie’s wedding, Donna has invited her two lifelong best girlfriends–practical and no-nonsense Rosie and wealthy, multi-divorcee Tonya–from her one-time backing band, Donna and the Dynamos. But Sophie has secretly invited three guests of her own.

I have to say I like this new ‘movical‘ genre, it’s not strictly a musical as there is dialogue and not everything is sung…and it uses all the songs from one band.

The last one I watched was Across the Universe, which used songs from The Beatles, it was a fantastic movie but I somehow didn’t blog about it…anyway the next one is this, based on the music of the legendary ABBA we present you Mamma Mia!

The story is cute, pretty straight forwards but oh wow is it entertaining, I haven’t been quite so entertained the whole way through, you want to laugh, cry and sing along. Of course it’d be better if you’re familiar with the songs of Abba, but then most people are especially though *cough* of my agegroup.

The cast is good with Meryl Streep coining the term GILF (work it out please) and yes she is 59! If you are offended by wrinkly boobs on a 30ft screen then please don’t watch this show. I don’t think I’ve really seen Meryl Streep in a funny movie, but boy was she hilarious, especially with her two cronies and her performance of ‘The Winner Takes It All’ was moving. 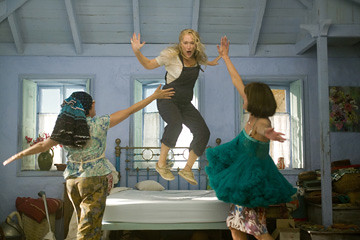 Julie Walters is absolutely fantastic as usual, her closing rendition of ‘Take a Chance On Me’ had me in stitches. Obviously no-one in the movie could pass for a trained singer but it didn’t really matter, the singing was incredibly real and emotionally charged and the performances were superb. Pierce Brosnan obviously can’t sing for nuts but who wouldn’t pay to see Bond sing ‘SOS‘.

The use of the extras during the songs was really really funny too and the Greek scenery was simply breathtaking. It was a beautifully filmed movie and the pace is fast, really fast…do try and keep up.

Plainly speaking this movie is cheesy and sassy and very very silly, it’s just fun, plain and simple fun, the singing isn’t technically good, the jokes aren’t very advanced or subtle and the plot isn’t complex..if you don’t like ABBA please give it a miss…BUT if you hear an ABBA song and you feel like jumping on the dancefloor or singing along do go and watch this movie.

For me personally it’s one of the most entertaining movies I’ve seen for a long time, I shall watch it again…and probably again and again. It shall be filed next to Friday, Clerks II and Jay and Silent Bob.